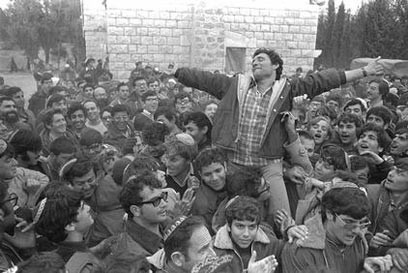 Rabbi Hanan Porat, 67, the iconic face of Gush Emunim settlement movement died on early Tuesday at Kfar Etzion, the prewar kibbutz that he helped reestablish after the Six Day War. A paratrooper in that war, he rose to lead the movement to settle the territories beyond the Green Line, serving in the Knesset as a voice of opposition to land concessions.

“He was an exceptional individual dedicated to a love of the Jewish people,” said Brooklyn State Assemblyman Dov Hikind, who has known Porat for 30 years. “He played a major role in the return of the Jews to Judea and Samaria. He was simple, modest, but with a purpose and a goal.”

At age 5, Porat was evacuated from Kfar Etzion as it was besieged by Arab forces. Ordained as rabbi by the Merkaz HaRav yeshiva, he was an educator before enlisting as a paratrooper. History enveloped his military service as he was among the first to secure the Temple Mount. “He got the ball rolling and should be given well-deserved credit,” said Dr. Joseph Frager, a longtime supporter of Jewish settlement projects.

Author Gershom Gorenberg, in his book Accidental Empire, describes journalist Haim Gouri’s visit to the 1975 demonstration at Sebastia, an event that catapulted the settlement movement and Porat’s political career. “In an Israel sick with materialism and status seeking, a post-revolutionary Israel, the fervent hundreds around Gouri reminded him of the barefoot youths of another era,” Gorenberg writes. The demonstration led to the founding of Elon Moreh, the first post-1967 Jewish community in Samaria.

An iconic photograph shows the demonstrators lifting Porat and Rabbi Moshe Levinger above their shoulders as they wave in triumph. “I remember Hanan Porat well. He used to come to our Yeshiva in Kiryat Arba to talk about the situation in Yamit, Yehuda and Shomron,” said Hebron resident Dovid Shirel.