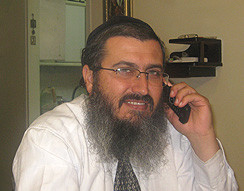 A scene from the end-of-days film, “Hamesima X” by Yuval Ovadia, which will be screened next Tuesday evening in Woodmere.
Previous Next
By Malka Eisenberg

The threat of missionaries to the Jewish community hits home next on Tuesday, when a worldwide consciousness-raising campaign begins in Woodmere.

Tuesday’s event will raise interest and funds for a film showcasing the work of Rabbi Daniel Asor, a baal teshuva (returnee to Judaic observance) and well-known affiliate of Yad Lachim, an organization that undermines the efforts of missionaries to convert Jews to Christianity.

In addition to a discussion of Rabbi Asor’s new anti-missionary campaign, the evening will feature a showing of Yuval Ovadia’s end-of-days film, “Hamesima X” and a conversation with Ovadia. The public is invited. Admission to the event, in the home of Ronen Cohen, is free.

Dr. Daniel Korman, a Five Towns internist, urges the use of Rabbi Asor’s book, “At the Gate of Rome,” in a course in yeshiva high schools. Korman said the book proves that quotations from the Tanach used by missionaries are fabrications, phrases taken out of context, and distortions. He said that missionaries “prey on Jews who are weak and unknowledgeable and spend $250 million per year in Israel alone.”

Asor was born in Israel. His father died when he was nine, and his mother remarried a more secular man. Asor grew up religious, attending various yeshivot including some time at Mercaz Harav and Hakotel.

He entered as a Hesder student but went on to a combat unit that at that time did not accommodate the religious soldiers. He excelled in the army as a highly respected and admired member of unit 51, an elite Golani unit.

After the IDF moved him to a different unit, he turned away from Judaism, finishing his service in 1989, moving to New York and then to Florida to learn to fly. He sought out and studied many religions except for Judaism. Missionaries confronted him there and convinced him to become a Christian.

He himself was baptized and became a missionary, convincing fellow Israelis at his flight school to also abandon their Judaism.

Asor’s brother-in-law is Yehuda Peretz, a Jew living in Israel, born a Mexican Catholic whose entire family (except for his father) converted to Judaism as a result of his searching for answers. In Peretz’s story, it was noted that natives of his area had Marano customs, growing long earlocks, hiding a Tanach under the father’s chair, and more.

Peretz got wind of the changes and actions of Asor and convinced him to come to Monsey to meet with a group of rabbis for a debate on Judaism versus Christianity.

The debate ran long into the night. Asor returned to his Christian handlers but there was already a reversal in his thinking. The rabbis ultimately convinced him to return to Judaism.

Asor now gives talks about his search for truth and finding it ultimately in a return to Judaism. He has also written in Hebrew books on the mistaken ideology and war with Islam and another book on cults and atheism.

Rabbi Emanuel Terenyo, a rabbi battling the ravages of Jews for Jesus in Texas (he said its congregations have “millions of Israeli” members), chanced upon Rabbi Asor’s book, in Hebrew, saw its merits and had it translated into English.

“The book will help many and strengthen them. It is very important. The books will sanctify the name of Heaven.”

Ovadia has produced a number of films, including “Hamesima X,” which is about a being sent to Earth to deliver mystical and Kabalistic secrets to a Mossad agent. It was selected for 12 international film festivals and won several awards. He told The Jewish Star that he expects his “film against missionaries will make an earthquake in the world. Rabbi Asor has a nice story — the film is based on his story.”