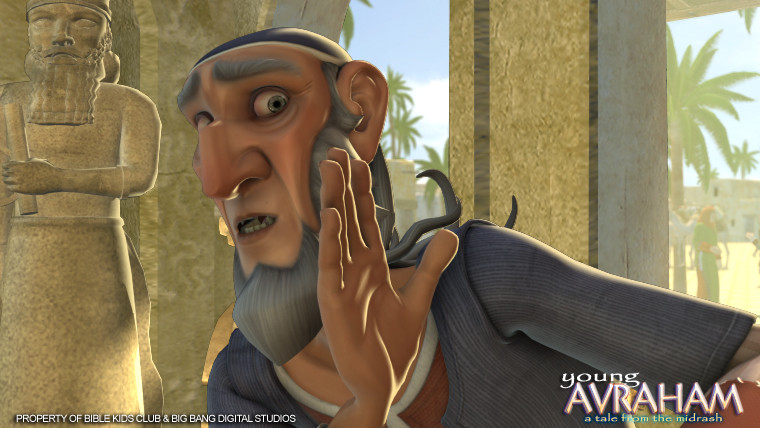 One of the most ancient tales from the Torah has been created in the newest style of computer-generated animation, forming a three-dimensional world of characters and cities. It’s the combination of old text with modern animation that’s turning heads. “Young Avraham: From the Ancient Stories of the Israelites” is a high quality film that relates the story of Abraham and his quest to prove that G-d is not made of stone and can be discovered through the conscious mind. The film spans the first 75 years of Abraham’s life, revealing a little known story from Medrashic texts.
Rabbis Yisroel Bernath and Zvi Hershcovich, two Chabad shluchim living in Montreal, who also happen to be screenwriters and Torah study partners, began extensive research to set up the plot of the movie based on a timeline, characters and tales found in the Medrash. “We felt we needed some creative liberty,” said Bernath, leader of the campus Chabad at NDG Concordia University, explains that the script is “A hundred percent true to the spirit of the text.”
The film takes place in the ancient region of Mesopotamia and begins with King Nimrod commanding Terach to release his newborn son, Abraham, because stargazers saw that the boy would rebel in the future against the king. We see Abraham grow from baby to a young boy hiding in a cave to the great leader he became. A touching scene in the film is when Abraham experiences an epiphany that ultimately changes the course of the world. When he leaves the cave and meets Utz – a fictional character based on a name found in the Torah who helps blend the story together – Abraham questions how a stone can be a great god if he can break it.
When Abraham meditates on nature and realizes that the sun and moon must have something greater than them – a Creator of all life - he puts a piece of cloth on his head. “This is the idea of a yarmulke – a reminder that there is something greater than us,” Rabbi Bernath said. “The idea of love and appreciation of a higher power.”
Depicted in the film is the discovery that Abraham learned in the land of Canaan with Noach, who also taught others about G-d. Since G-d had previously tried to destroy the world through the flood, Abraham’s job was to now make the world a better place. That meant leaving Canaan and returning to Ur to face Nimrod and abolish idolatry.
Rabbi Bernath says a tremendous amount of detail went into creating the finished story and the Mesopotamian city of Ur. Based on the minimal archaeology available from that period along with what’s described in the Medrash, the team painted a picture of what they believed the city looked like. The project took a huge – and diverse - team of innovators: From devout hasidic executive producers and screenwriters to at least 25 animators, artists, a secular Jewish director and a non-Jewish producer. J. Jacob Potashnik helped polish the script and Haim Sherrf, an artist from Montreal, drew the initial characters that were later used by the animation team. “It was an amazing experience sitting in the studio and watching these guys bring the characters to work,” Rabbi Bernath said. “All of a sudden it all looks real.”
Convincing the director, Todd Shaffer, an evangelical Christian, to stay true to the Jewish commentaries was not always an easy task but the Jewish team managed to prevail. The compromise – they allowed him to use language that would appeal to the Christian audience. Therefore, expect to hear words such as “wrath, upon, avenge” sprinkled throughout the film.
The Jewish side of the biblical account has three hasidic executive producers who contributed half of the film’s funds. Eliyahu Cohen, Saadya El Haddad and Moshe Dayan, insisted the story be told right. They dreamed of a professional movie with a true message and now call their project “Bible Kids Club.”
Already the DVD is selling fast in Jewish stores since Purim when it had its pre-market release. Rabbis Bernath and Hershcovich completed the script in 2007 and the film went into production for the following four years.
Rabbi Hershcovich, who previously ran Chabad-Lubavitch of Stavropol in Russia, is now a full time screenwriter working on some Hollywood scripts. “People thought it was a Hollywood production with a Bible story,” Bernath said. “They couldn’t believe a project of this caliber was produced with hasidic guys behind it.”