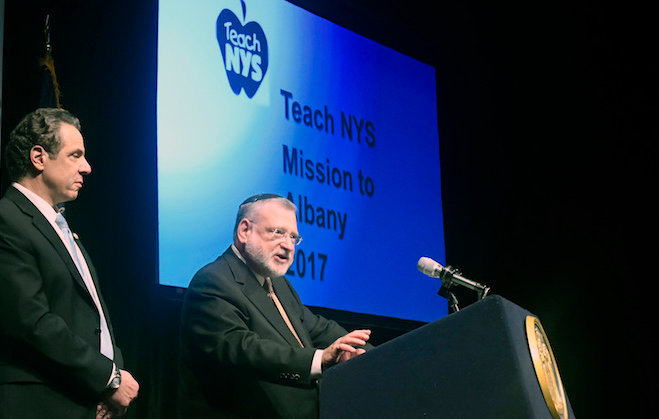 After two decades as a volunteer for the Orthodox Union and the past six years as the organization’s executive vice president, Woodmere resident Allen Fagin is retiring from a job for the second time.

Fagin, 70, is a lawyer who ended his first career as chairman of Proskauer Rose LLP in 2013, after 38 years in the legal field. Since being named EVP of the OU in 2014, Fagin worked hand in hand with Lawrence resident Moishe Bane, the OU’s president.

Applying his law-firm management philosophy to his job with the OU, Fagin aimed to optimize its resources.

Communications, data management, fundraising, information technology infrastructure, marketing, public relations and publicity were all enhanced and expanded, Fagin said. “Many of our management decisions were made by anecdote,” he said.

One of the OU’s popular new programs is Torah New York. Last year, the third annual event attracted 2,500 people to the indoor space at Citi Field for a day of Jewish learning.

“It’s yet another opportunity to provide direct services to our constituency under the OU umbrella,” he said.

In the six years that the OU’s Teach Coalition has existed, it has advocated for nonpublic school education and helped increase funding for those schools in New York state.

“Only 1 percent of tax dollars is going to nonpublic schools, and parents are paying property taxes and getting very, very little — it is fundamentally unfair,” he said, adding that 15 percent of children in New York attend nonpublic schools. In 2019, 338 nonpublic schools shared $5 million that the state allocated for science, technology, engineering and math programs, known as STEM education. Teach NYS, a division of the Orthodox Union’s Teach Coalition, was the primary advocate of equitable STEM money for nonpublic schools.

Bane and Fagin have known each other for decades, Fagin said, and came up through the OU’s ranks together.

“Allen has served as a transformative professional leader, growing the organization in creative and impactful ways,” Bane said. “His vision has not only significantly expanded OU’s reach and effectiveness, but also under his guidance and leadership, the OU has evolved into an impressively professional and disciplined institution.”

Fagin, who will stay on until September to help with Hauer’s transition, said of Bane, “It is a delight to be working with him, as he has incredible vision and is a prodigious worker on behalf of the organization.”

Hauer said he was humbled by the opportunity to become the OU’s executive vice president. “I look forward to working with Allen through this transition and develop a vision and specific plans later in the year,” Hauer said.

The National Conference for Synagogue Youth, which dates back to the 1950s, was expanded under Fagin’s leadership. He noted that half of the teenagers involved are from public schools, so it’s not for just yeshiva or Jewish day school students. NCSY’s mission is to connect Jewish teens through recreational programs that aim to develop a positive Jewish identity.

“Every youth program has one eye on the present and one eye on the future,” Fagin said. “Teens today are the adults, parents, grandparents of the future. It becomes critical for their upbringing and Jewish identity. It is a transformative event for them to grow and mature.”

Last year the OU launched the Center for Communal Research, to help it make data-based decisions on programs and policy initiatives. To kick-start Jewish-run nonprofits, the OU also created Impact Accelerator, which serves as an incubator for fledging organizations. There is also the Women’s Initiative, a program offering women learning and leadership opportunities.

The OU’s Yacahd addresses the needs of Jewish people with disabilities, and Israel Free Spirit Birthright arranges trips to the Jewish state for those ages 18 to 32.

“People know about NCSY programs far and wide,” Fagin said. “We have many others.”