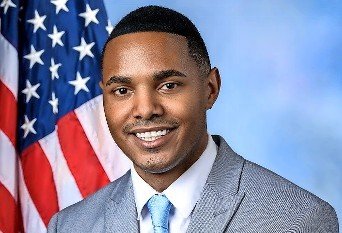 Rep. Ritchie Torres, who represents the 15th Congressional District in the Bronx.

I’m praying for all the Israelis who are experiencing a level of trauma and terror that most of us, including myself, cannot even begin to imagine.

Israel is under siege not only from the rocket fire — relentless rocket fire — at the hand of Hamas, but also from the endless propaganda war that has taken on a new intensity, especially here in the United States.

I’m here to affirm that as a member of Congress, I have an unwavering commitment to both the sovereignty and security of Israel as a Jewish state.

With sovereignty and security comes the inherent right of self-defense, a right that every state, including our own, takes for granted.

Why should Israel be an exception to the rule? Why should Israel be held to a deadly double standard in a moment of terror? It is unreasonable to expect a nation-state to be the passive target of hundreds of rockets and then forfeit the right to defend itself under a constant stream of terror.

No right-minded person would impose that kind of self-destructive burden on any other country.

Now is not the time to be silent. All us, especially those holding elective office, have to be visible and vocal, fearless and forceful, in standing up for our greatest friend in the Middle East.

Support for Israel especially in moments like these is not for the faint-hearted. The moment I sent out a statement denouncing the rocket fire from Hamas I was swiftly denounced by BDS extremists as a white supremacist, as a supporter of apartheid and ethnic cleansing and genocide — terms that have been stripped of their original and proper meaning.

And although these comments cause great pain to my loved ones, the complicity of silence would cause me even greater pain. I remain as determined as ever to speak out. And if I can speak out, then anyone can. And everyone must.

We cannot allow ourselves to be silenced by an overbearing Twitter mob dominated by the extremes of American politics. If we in elected office are not willing to say and do what is right, then we are unworthy of the office we hold.

And so I’m here to state, in the clearest possible terms, that I stand with Israel because doing so, quite simply, is the right thing to do.

A sense of humor while fighting antisemitism