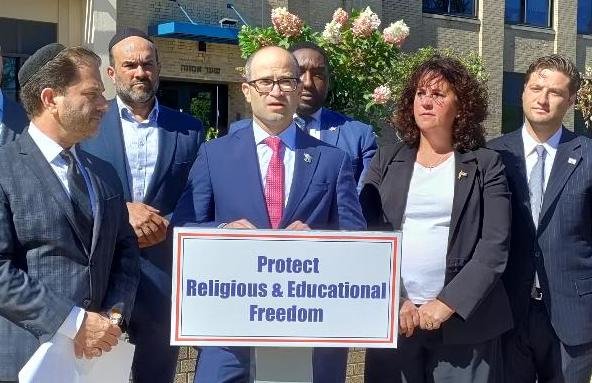 In the wake of an order by the New York State Board of Regents that private schools — including yeshivas — demonstrate that their secular studies curricula are substantially equivalent to what is taught in public schools, Republican electeds and candidates in Nassau County fired back.

Standing alongside several Jewish community leaders outside the Hebrew Academy of Long Beach (HALB) in Woodmere, the Republicans characterized the policy as an unwarranted hostile attack on freedom of religion and educational liberty.

“We stand here today in defense of religious and educational freedom,” said Franklin Square Assemblymen Ed Ra. “The State Education Department has led a mean-spirited and ugly campaign to stamp out religious education, not to mention all private education. We won’t stand for it.”

“The State Education Department is being heavy-handed, demonstrating a secular super-iority over the education of local religious schools, especially our yeshiva community of schools,” said Five Towns Assemblyman Ari Brown. “This authoritarian maneuver is a slap in the face of democratic principles, religious freedom and educational liberty.  It has to stop now.”

Brown, an observant Jew and the father of seven children who attended religious schools, said that one of the most important priorities for him was to be able to raise his family in accordance with their faith. He said that surrendering control of yeshivas’ curricula would be an abrogation of his responsibility as a parent and a Jew.

“Do not try to force us to give up our religious values and our right to provide our children with a religious education,” Brown said. “This is one more form of religious persecution of my people, and it should not be tolerated by any person of good conscience.”

Also participating in the event outside HAFTR were Senate candidates Patricia Canzoneri-Fitpatrick, James Coll and Jack Martins, and Assembly candidate Jake Blumencranz, along with Rabbi Mordechai Kamenetzky of Yeshiva of South Shore in Hewlett, and Richard Altabe and Jonathan Katz of HALB.

“I am a retired police officer,” stated Coll.  “Protection of people’s freedoms and liberties was at the core of my career in public service.  I will fight this assault on our way of life and freedom of choice when it comes to education.”

“If we allow this attack on our families’ right to choose how they raise and educate their children, we will be taking a very dangerous step down the road toward secular intolerance and authoritarianism,” said Martin.

Blumencranz pledged to be “a strong voice for the values and rights of religious educational institutions.”

“This is nothing more than religious harassment,” said Canzoneri-Fitzpatrick.

“Providing a high-quality secular education is critically important to what we do here at HALB,” noted Altabe, the principal of the HALB Lower School and executive president of institutional advancement.

“As religious Jewish Americans, we sincerely appreciate the freedom to raise our families in the traditions of our faith, and our educational institutions provide the foundation for those values. We cannot relinquish control of our curricula or selection of our teaching staff to any government agency.”

HASC breaks ground for its new campus in Brooklyn