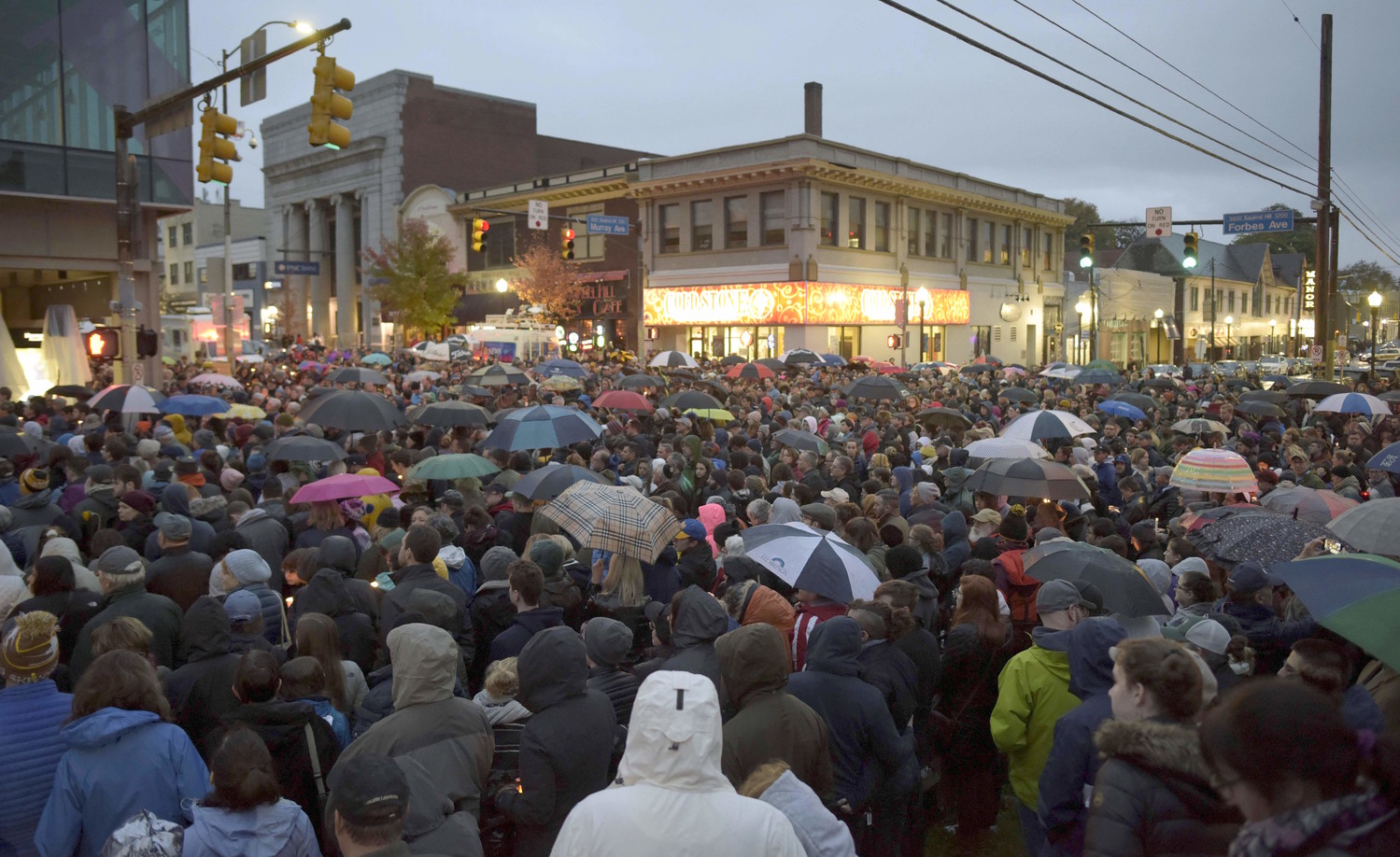 From left: Tammy Hepps and Kate and Simone Rothstein recite tehilim while nearby, as Shabbos ended, members of the Squirrel Hill community came together for a vigil in remembrance of those who were killed earlier in the day.
AFP/Getty Images
By Ben Sales, JTA

When a gunman entered The Tree of Life Congregation and killed 11 worshippers on Saturday, he also struck at the heart of Pittsburgh’s Jewish community — the neighborhood of Squirrel Hill.

Squirrel Hill, in the eastern part of Pittsburgh, has been the center of the city’s Jewish life since the turn of the 20th century, when wealthy Jewish families began settling there. While the Jewish communities of other cities have moved neighborhoods or migrated to the suburbs in the ensuing century-plus, Squirrel Hill and its environs have remained the home of Pittsburgh’s Jews.

Jeff Finkelstein, president of the Jewish Federation of Greater Pittsburgh, says the neighborhood’s sustained Jewish presence is a result of its proximity to local jobs and two universities nearby — Carnegie Mellon University and Chatham University. (The University of Pittsburgh isn’t far away, either.) Recently, he said, the area has also experienced an influx of Jewish millennials seeking urban life.

“It may be the last major urban-centered Jewish community outside of Manhattan in the country,” he said. “Over the years, this Jewish community has made serious investments into the Jewish institutions in Squirrel Hill.”

Today the neighborhood is home to about 30 percent of the Pittsburgh area’s 50,000 Jews, or about 15,000 people, according to a 2017 study of the Jewish community. It’s home to more than a dozen synagogues across denominations. Tree of Life, which recently merged with another congregation, Or L’Simcha, is one of two Conservative synagogues in the neighborhood. There are also multiple Orthodox and Reform synagogues in an area just over one square mile wide.

Like many Jewish neighborhoods, Squirrel Hill boasts an array of Jewish day schools (four), kosher restaurants (three) and other Jewish community organizations, according to a 2016 article in Shady Ave., a local magazine. In addition to a Holocaust museum, it’s home to a sculpture of a Star of David made of 6 million soda can tabs — a project of Community Day School, a local Jewish school, that took five years to complete.

Squirrel Hill’s centrality to Pittsburgh Jewry also is reflected in the numbers. While it’s home to 30 percent of Pittsburgh Jews overall, nearly half of the area’s Jewish children are being raised there. The neighborhood ranks high as well in terms of synagogue membership, Jewish education and similar measures, according to the community study.

(It was also home to the children’s television icon Fred Rogers, the host of “Mister Rogers’ Neighborhood,” who was not Jewish.)

But what sets Squirrel Hill apart, Finkelstein says, is the cohesiveness of its Jewish community. He says its wide range of denominations and Jewish organizations make an effort to collaborate. At an all-night learning program this spring on the Jewish festival of Shavuot, 500 people from across the Jewish spectrum came to study together.

“There is a phrase in the Talmud that has always felt especially relevant to our community: Kol Yisrael Arevim Zeh Bazeh. All of Israel is responsible for one another,” New York Times columnist Bari Weiss, who celebrated her bat mitzvah at Tree of Life, wrote in a column Saturday. “For us that is not a lovely theory but a lived reality.”

That communal unity, Finkelstein says, has been in evidence in the wake of the shooting. In addition to a vigil Saturday night in Squirrel Hill, its Jewish organizations have mobilized. The local JCC is acting as a base for the community and families of the victims, where rabbis from around the area have visited throughout the day. Jewish Family and Community Services of Pittsburgh is providing counseling, while the local Jewish federation is handling donations.

This is not the first time the community has experienced anti-Semitism recently. Last year, residents found stickers and business cards with white supremacist slogans around the neighborhood featuring swastikas and messages like “It’s not illegal to be white ... yet.”

But Finkelstein says Saturday’s events are the worst he’s ever experienced in his professional life.

“This is the one day I hoped would never happen,” he said. “It’s about these families — my heart goes out to them. Just watching their emotions has shaken my soul.”