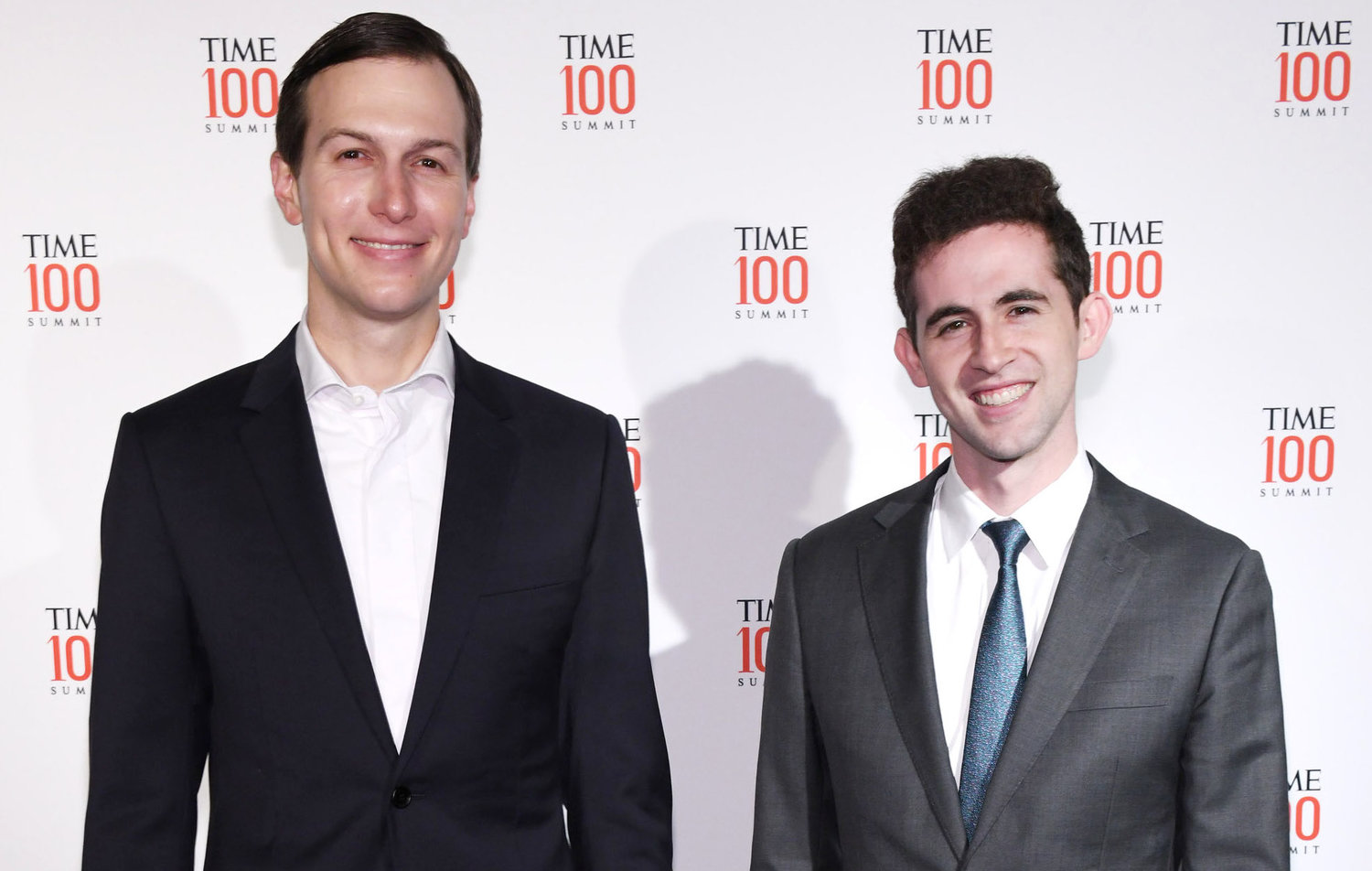 Jared Kushner and Avi Berkowitz at the TIME 100 Summit 2019 on April 23, 2019 in New York.
Craig Barritt/Getty Images for TIME
By Ron Kampeas, JTA

WASHINGTON — The sentence came at the end of a list of White House talking points regarding the surprising departure of Jason Greenblatt, President Donald Trump’s former top Middle East peace negotiator: “Avi Berkowitz and Brian Hook will take on an increased role on the team.”

For Middle East tea-leaf readers, Hook was the more immediately interesting story. He’s the lead State Department official on Iran, and his joining the peace-brokering team suggests that the Trump administration sees containing Iran and forging peace between Israel and the Palestinians and other Arab states as of a piece.

But Berkowitz’s elevation tells an even more Trumpian story: one of elevating those who are close to the family, as opposed to Washington insiders, and of a Middle East peace team that has made Israel’s interests paramount in its strategies.

There isn’t a ton of public knowledge about Berkowitz, a 30-year-old assistant to Jared Kushner who graduated from law school in 2016, and the critical quick-take headlines were harsh. “Trump’s New Mideast Point Man Is Jared Kushner’s Former Coffee Boy Avi Berkowitz,” Vanity Fair wrote. And from New York magazine: “Trump Somehow Replaces Unqualified Mideast Envoy With Even Less Qualified One.”

What’s the story on Berkowitz (who declined an interview for this story)? Here are some facts.

He’s a good friend of Kushner.

According to the most comprehensive profile to date of Berkowitz, in Business Insider in 2017, he met Kushner when Berkowitz was an undergraduate at Queens College, and they joined a pickup basketball game at a Passover retreat in Phoenix, Arizona.

They became fast friends. Berkowitz followed Kushner to the newspaper he then owned, the New York Observer, and then to the Trump campaign and subsequently the White House.

Much of his job description, at least publicly, appears to include being joined at the hip to Kushner and his wife, Trump’s daughter Ivanka. Much of his Twitter feed is retweets of articles praising the two, at times accompanied by a Berkowitz addition of an emoji expressing joy.

He loves his job.

Jewish Insider reported in 2017 that Berkowitz, who had just graduated from Harvard Law, turned down a job offer at the “white shoe” law firm Gibson Dunn the previous year to join the Trump campaign crunching data.

Berkowitz appears to have no regrets: Another feature of his Twitter timeline are photos of him on the White House grounds, as well as traveling with the Kushners on the job.

In the arcana of federal government lingo, the leap from “assistant” to “advisor” is significant” — a transition from answering phones to shaping policy.

He’s cut from the same religious and ideological cloth as Kushner, Jason Greenblatt and David Friedman.

For its first year or so, the Kushner peace team included an Arab-American woman, Dina Powell, which at least offered it the patina of diversity. Since her departure in January 2018, however, its uniformity is striking: Berkowitz, Kushner, Greenblatt and Friedman, the U.S. ambassador to Israel, were all raised in Orthodox Jewish homes, are all from the New York area, and all have deep pre-government ties to Israel and its religious institutions.

Berkowitz studied at Yeshiva Kol Torah in Jerusalem for two years. His classmate there, Rabbi Johnny Ouzzan, told Business Insider that Berkowitz would have come away understanding that the West Bank is part of “lands that religious Jews believe were part of the whole of Israel that was given to the Jewish people, starting with Abraham and Isaac and Jacob going back to the times of the Bible.”

Martin Indyk, who held jobs similar to Greenblatt’s under Democratic administrations, on Twitter called Berkowitz a “nice guy but does not have the weight or experience of Trump’s former real estate lawyer.”

“Avi has been an integral member of this team since the beginning,” Brooks said in an interview with the Jewish Telegraphic Agency. “He’s been to all of the trips overseas and in all the meetings, in a high-level capacity developing the administration’s plan. It’s not as if, as some people assume, they plucked his resume off the shelf.”

Berkowitz’s rare appearances in media coverage of the peace deal suggests that he does indeed have a deep involvement. In April, Reuters reported that he was one of a handful of people who have access to the as-yet unveiled plan. In November, The New York Times reported that Berkowitz, Greenblatt and Kushner convened a private dinner of major Jewish philanthropists identified with both parties to pitch them the peace plan.

Berkowitz also was given got the seal of approval of the American Israel Public Affairs Committee.

“Mr. Berkowitz has a strong reputation on working on these important issues and we look forward to engaging with him in advancing the prospects for peace and reconciliation between the Israelis and the Palestinians,” AIPAC spokesman Marshall Wittman said in an email.

The problem with Berkowitz, said Debra Shushan, the legislative director for Americans for Peace Now, was not his callowness but the very experiences he brought to the job.

“His religious commitment to the Greater Land of Israel is the central story,” she said on Twitter.

He’s sensitive to some biases, not so much to others.

However, Berkowitz also voiced skepticism of activists at the law school whose advocacy led to the retirement of its shield, which was a tribute to one of the school’s founders, a slave owner.