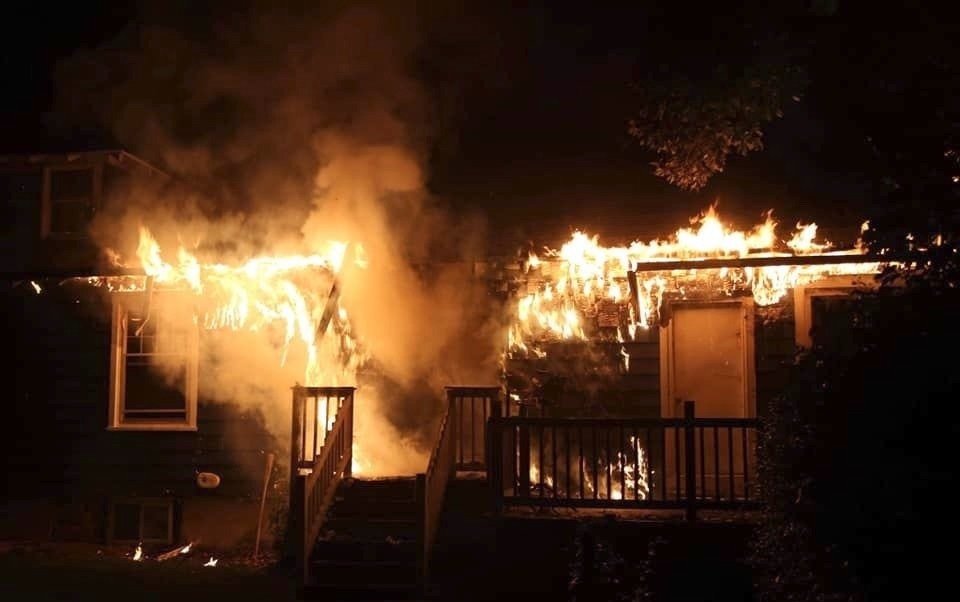 A fire at the University of Delaware Chabad on Aug. 25 has been ruled an arson. An earlier fire at a Chabad House in Portland was also ruled arson.
Dave Wilson/Aetna Hose, Hook & Ladder Company 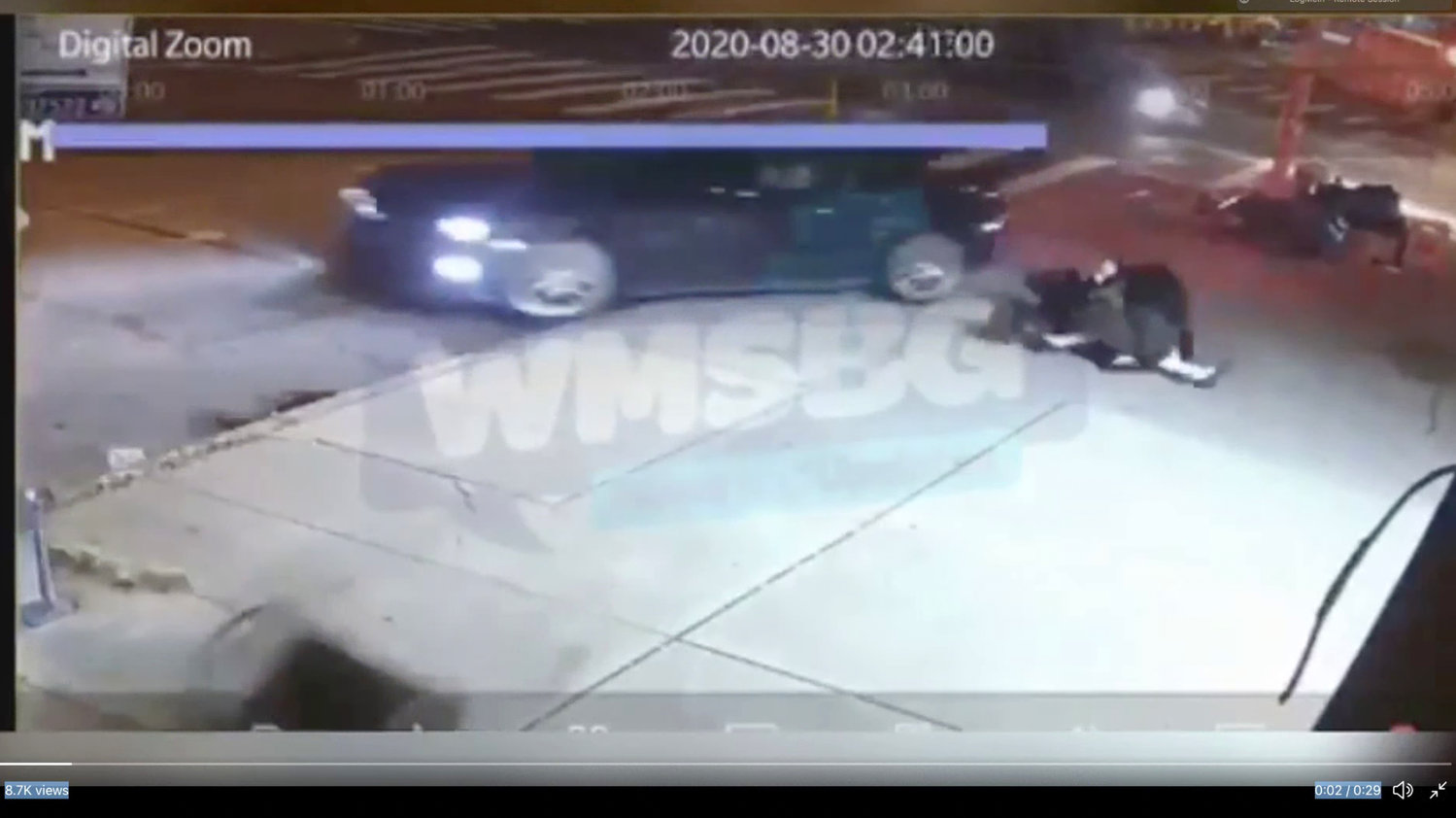 A Chevy Camaro mounted a sidewalk and hit two Hasidic men late Sunday night at Lee Avenue and Tayor Street in Williamsburg before fleeing the scene. The men were reported to have sustained minor injuries.
@WMSBG 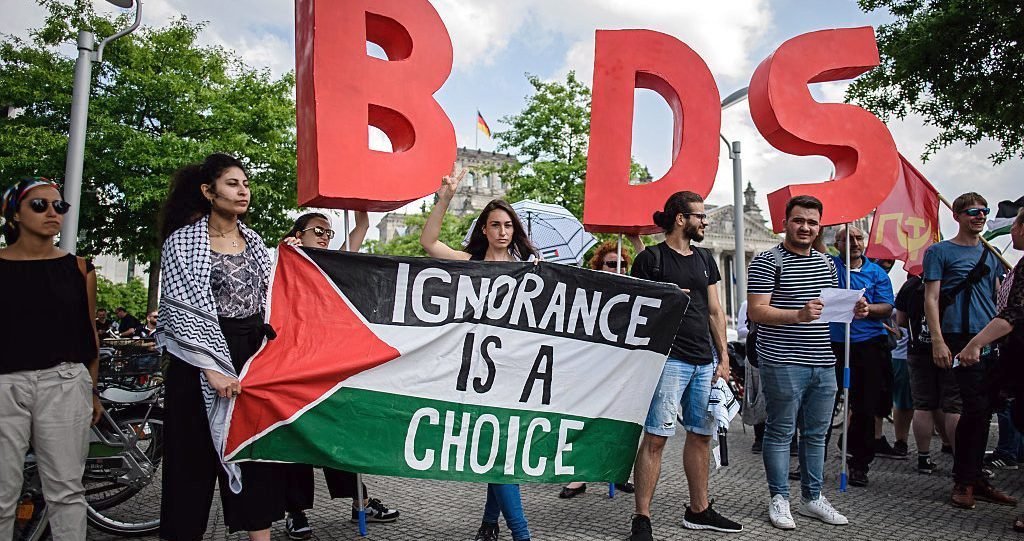 Protesters in Berlin hold a Palestinian flag and the initials of the anti-Israel BDS movement as Israeli Prime Minister Benjamin Netanyahu was visiting Germany in August 2019.
Israel Hayom 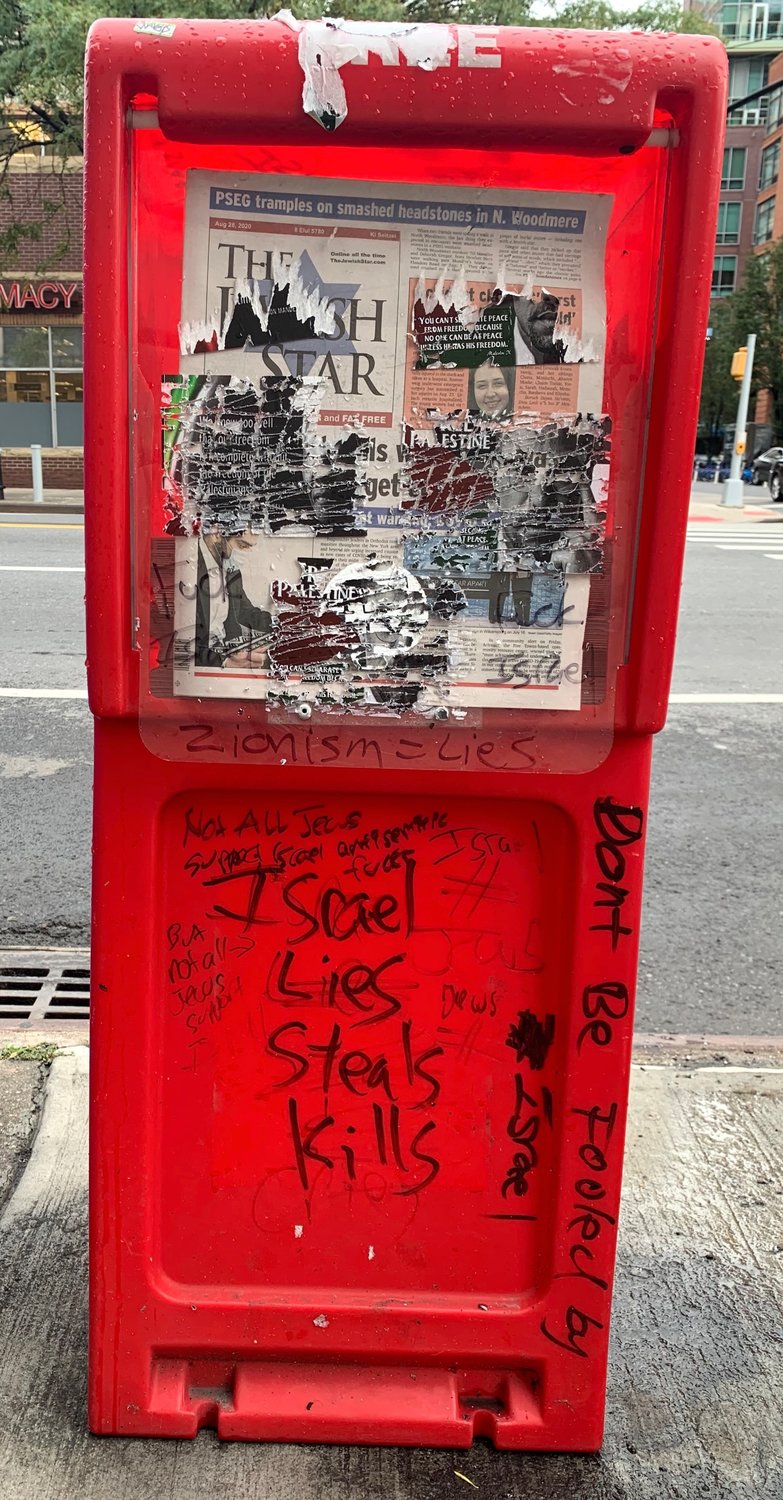 Two Jewish Star newsboxes in Downtown Brooklyn were vandalized with anti-Israel graffiti and plastered with stickers (removed before this photo was shot) attributing anti-Israel sentiments to Malcolm X and Nelson Mandela. The boxes are in well-lit heavily trafficked areas, outside Boro Hall and Trader Joes.
Ed Weintrob 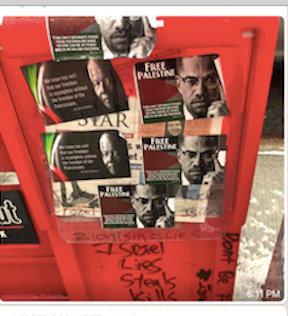 A sign on a boycotted store owned by German Jews in 1938: “Protect Yourselves, Don’t Buy from Jews.”
Previous Next
By The Jewish Star from Combined Sources

A firestorm of anti-Jewish venom, often fueled by anti-Zionism — including BDS advocacy that assaults the heart of Jewish identity — continued to spread this week, both in the US and around the world.

Anti-Semitism voiced by coronavirus skeptics was also on the rise.

Here’s a sampling of crimes that mainstream media chose to ignore or downplay, including vandalism often shrugged off by victims or excused by onlookers.

•Two Hasidic men standing on a Williamsburg street corner late Sunday night were attacked by a by a car that appeared to swerve purposefully onto the sidewalk to hit them. The men who were run down at Lee Avenue and Taylor Street were initially reported to have sustained light injuries.

•In Kenosha, Wisconsin, the driveway of the city’s 93-year-old Beth Hillel Temple was spray-painted with the words “Free Palestine” during Black Lives Matter protests. Similar graffiti was attached to Jewish institutions in Los Angeles during the post-George Floyd riots there three months ago.

•Several hundred protesters, some associated with the anti-Semitic Reichsburger (Reich Citizens) movement, attempted to storm through the doors of the Reichstag, Germany’s parliament building in Berlin.

•A BDS activist was convicted of assault that took place during a presentation on the Holocaust at Humboldt University in Berlin.

•British authorities arrested Dr. Issam Hijjawi, former head of the Association of Palestinian Communities in Scotland, for allegedly committing preparatory acts of terrorism in connection with the New Irish Republican Army. Hijjawi has called BDS a “just and civilized action.”

•An anti-Semitic image used within the British Labour Party two years ago was worn on the t-shrts of at least two protesters at the March on Washington 2020 last week. The image depicts Jewish bankers playing a game similar to monopoly on the backs of people of color, underneath the masonic Eye of Providence. The image on their shirts was flanked by the phrase: “All we have to do is stand up and their little game is over.”

•In an area of Downtown Brooklyn whose heavy pedestrian traffic includes many Orthodox Jews, two Jewish Star newsboxes were vandalized with anti-Israel screeds that included “Free Palestine” and profanities.

The 125-member Reform congregation tagged by graffiti in Kenosha has been supportive of the BLM movement, signing onto an interfaith letter condemning “a broken societal system which disproportionately affects communities of color.”

“With so much else going on, there seems to be both time and effort available to lash out at symbols of the Jews,” wrote columnist Jonathan Tobin this week [bit.ly/31PFRnG]. “The impulse to spray paint “Free Palestine” on Jewish sites is an injustice not just because it is vandalism, but also because the conflict between Israel and the Palestinians has nothing to with a synagogue — and certainly not one in the Midwestern United States. … [It is] a form of anti-Semitism.”

In Germany, the Central Council of Jews warned of increased anti-Semitism due to the protests against coronavirus measures.

“For months, conspiracy theories with anti-Semitic tendencies have been deliberately stirred up in the coronavirus debate,” Council President Josef Schuster said. “If, for example, the Rothschilds are blamed for the pandemic, then this is a synonym for Jews,” said Shuster.

“Right-wing groups have influenced the corona protest movement,” Jörg Radek, vice-president of Germany’s police union, said. “They are about to completely take over the movement.”

The organization involved in the Reichstag incident espouses violence and believes that the country’s 1937 borders still exist. Many of its members deny that the Holocaust happened.

Among those arrested was celebrity vegan chef Attila Hildmann, who has been spreading coronavirus conspiracy myths at rallies and pushing anti-Semitic conspiracy theories online.

Germany’s commissioner on anti-Semitism, Felix Klein, said a line had been crossed and that protesters evoked the “worst memories.”