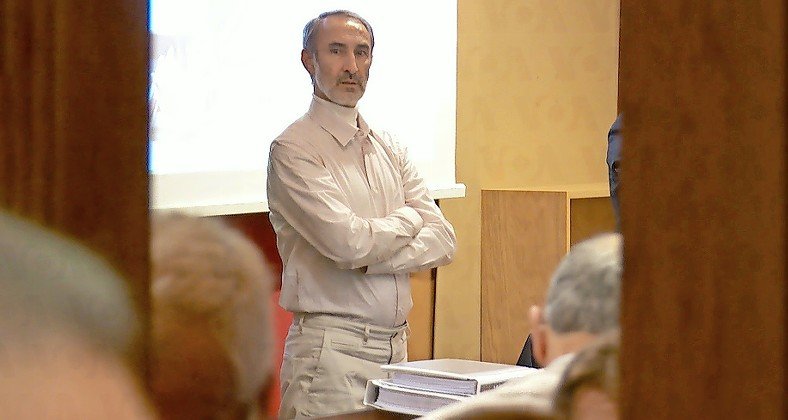 Hamid Nouri on trial in Sweden on May 2.
Voice of America via WikiCommons

The trial of former Iranian regime operative Hamid Nouri provides a harrowing glimpse into the systemic abuse of human rights in the Islamic Republic.”
By Ben Cohen

Iran thrust its way back into the news cycle last week as President Joe Biden embarked on a four-day tour of the Middle East beginning in Israel, but arguably, the most significant event to impact the Islamic Republic’s international reputation took place in faraway Stockholm.

On July 7, a Swedish court sentenced a former Iranian regime operative, Hamid Nouri, to life in prison for his role in the massacres of political prisoners in 1988 at the close of the eight-year war between Iran and neighboring Iraq. Acting on a tip from the relative of one of his victims, Swedish police arrested Nouri when he flew into Stockholm in November 2019, retaining him in custody ever since. Last week’s court sentence marked the first time that an Iranian official had “been held accountable for mass atrocities,” according to Hadi Ghaemi, executive director of the New York-based Center for Human Rights in Iran.

Nouri’s trial provided a harrowing glimpse into the systemic abuse of human rights in the Islamic Republic. A total of 58 witnesses testified against him, recalling the executions of some 5,000 left-wing and secular nationalist political prisoners. A member of Iran’s Islamic Revolutionary Guard Corps, Nouri served as a jail guard at Evin Prison in Tehran and at Gohardasht prison outside the Iranian city of Karaj, where he aided the so-called “Death Commission” led by three judges — one of whom, Ebrahim Raisi, is now the president of Iran.

Survivors of the massacres — many of them from the Mujahedin-e-Khalq (MeK) guerilla organization — told macabre tales of torture and mass hangings. Nouri specifically was identified as one of the officials who manned the “death corridor,” the passageway that condemned prisoners walked down on their way to the execution chamber.

Nouri insisted throughout his trial that the charges against him were false, but the presiding Judge Tomas Zander disagreed, deeming that “nothing substantial has emerged which gives the court reason to question the investigation’s reliability and robustness” as he delivered the verdict.

Meanwhile, the Iranian regime condemned what it depicted as a politically motivated assault on the Islamic Republic’s judicial system. But such gripes mean little when the lasting impression left by the trial is that the same regime responsible for the 1988 atrocities remains in power today.

Indeed, the “death corridor” overseen by Nouri has now become a regional enterprise, as Iran continues to back its terror proxies in the Middle East, variously plunging Lebanon into a humanitarian crisis, preventing the emergence of an independent Kurdish state in northern Iraq, fueling the vicious civil war in Yemen and zealously opposing any moves towards a peace agreement between Israel and the Palestinians that would secure the Jewish state’s sovereign existence.

Simply put, death is the primary currency of the Islamic Republic.

Iran has also ventured further afield into Europe and Latin America, where it has cultivated strong ties with Venezuela and other left-wing authoritarian governments. Additionally, Iran has always enjoyed a productive relationship with Russia with a significant military component — one that could now impact the war in Ukraine.

As Biden prepared his departure for the Middle East, a White House press briefing disclosed that Iran was planning to provide Russian President Vladimir Putin with “hundreds” of unmanned aerial vehicles, including weapons-capable drones, for use in Moscow’s aggression against its southern neighbor. As National Security Adviser Jake Sullivan observed, Iran had already provided the same weaponry to its Houthi allies in Yemen.

Given its serial offenses across nearly half a century, Iran can hardly be looked upon as a reliable partner in negotiations. When it does parley, as was the case with the 2015 nuclear deal, its representatives have proven themselves adept at extracting the concessions that allow them to append their signatures.

With the Joint Comprehensive Plan of Action (JCPOA, the technical name for the 2015 deal) intact, Iran can look to a “sunset clause” that would enable it to freely develop a nuclear weapon early on in the next decade. Without it — as has effectively been the case since the United States withdrew from the JCPOA in 2018 — the regime has continued with its clandestine nuclear activities and now possesses 95 pounds of uranium enriched to 60 percent purity, according to the International Atomic Energy Agency (IAEA.) That’s enough fissile material for a single nuclear weapon, according to experts, though the delivery system is still being worked on.

Biden has been decidedly more circumspect than was the Obama administration, which negotiated the original deal, when it comes to Iranian intentions. Yet the White House still holds out hope for a diplomatic resolution of the tensions with Iran, even if, in the same breath, it concedes that there is little possibility of that outcome.

Journalists who accompanied the president to Israel engaged in forensic comparisons of Biden’s statements with those of Israeli Prime Minister Yair Lapid on the subject of Iran’s ongoing nuclear development. Lapid was crystal clear that continued development would be dealt with through force, while Biden, in the words of the New York Times, “stuck to talking about blocking Iran from obtaining a weapon—not a program that might be intended to develop one.”

Biden has used a more general formula with Iran that was also articulated by Obama; namely, that “all options” remain on the table when it comes to Iran’s nuclear ambitions.

Yet for the time being, what’s clearest of all is that the Biden White House is happy to keep an air of vagueness over its Iran policy. And it is likely betting that Israel’s desire to use Biden’s good offices to secure a formal peace agreement with Saudi Arabia, alongside the peace deals already reached with the United Arab Emirates, Bahrain, Sudan and Morocco, will temper any protests from Jerusalem about US Iran policy.

The result is that, for all the rhetorical heat radiated towards Iran during Biden’s Middle East tour, its “death corridor” remains open for business. Since the Islamic Revolution of 1980, successive Western governments have kicked the can down the street in the hope that future administrations will succeed where they failed in reining in Tehran.

Now that Russia’s invasion of Ukraine has shown us where such appeasement can lead, will the West make the same mistake again? So far, the American answer seems to be: “maybe.”