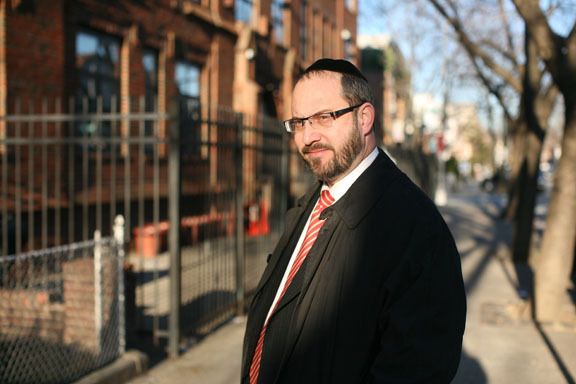 Issue of February 5, 2010/ 21 Shvat 5770
Before he announced that he would be resigning from his position as City Councilman of the 44th District to become Deputy Comptroller of New York City, Simcha Felder posed a question to his family, his friends, and to rabbis in Brooklyn with whom he is close: Could he leave a position to which he was just voted in for a third time?

“There was a consensus of all those I spoke to — if I was leaving government to go to private industry that would not be right, because I just asked people to vote for me and they elected me with no opposition,” Felder related on Sunday afternoon, Jan. 31, in his last official day as a member of the New York City Council. “But since I would be going to a position city-wide where I would hopefully be able to do good, not only for the community but the city as a whole, it was a rare opportunity for a frum person to make a kiddush Hashem and they encouraged me to do it.”

Felder set one condition in order to be interviewed for this article: it would need to take place before Felder left office and took up his new position. Over the phone, Felder apologized in a nasal voice, saying he had been suffering from a cold and was trying to get over it.

Felder, while not the only Orthodox Jew currently serving on the New York City Council, is the only member in Council history to have been educated at the chassidishe Karlin Stolin yeshiva. His district includes the heavily frum neighborhoods of Borough Park, Midwood and Bensonhurst. Two months into his third term, which he was able to seek after Mayor Michael Bloomberg successfully put an end to term limits, and after losing an election for state senate, Felder announced he would be resigning to join the team of New York City Comptroller John Liu.

“I’m supposed to say something to make people curious like when John Liu runs for mayor, I’ll run for comptroller, but I won’t say that,” Felder explained. “It’s a possibility. I’m not thinking that; I’m thinking about starting at eight and figuring out how to make it through the day.”

As deputy comptroller he will oversee the city budget, putting to use his training as a Certified Public Accountant. Prior to being a council member, Felder was a tax auditor for the city, auditing large corporations like IBM and Johnson & Johnson. He also taught business management at Touro and Brooklyn College.

Sharon Lee, a spokesperson for Comptroller Liu, said that Felder was picked for the “wealth of experience that he brings from both his City Council service and his previous tenure in the Comptroller’s Office...” and his being “invaluable in working out solutions in our tough economic environment.”

The switch marks the end of Felder’s colorful tenure in the City Council, which he managed with equal parts political savvy, sagacity and being a yente. In one example, Felder supported Christine Quinn, an openly gay woman, for speaker, though for religious reasons he felt it necessary to abstain from the actual vote. He solved the problem by leaving the council chamber to go the bathroom during the balloting.

In an hour-long interview only interrupted when one of his daughters entered his kitchen (Felder does not discuss his family publicly; only to say that he has three daughters and one son, and two grandchildren), Felder looked back at his years in office with pride, focusing mainly on the small improvements he was able to make in the lives of his constituents, like changing garbage truck routes to ease traffic congestion in Borough Park, passing legislation against dumping leaflets and menus on city doorsteps, and providing funding to parks and playgrounds in his neighborhood.

“I would say I love slush, every flavor,” Felder explained. “What people criticize as slush is the engine that allows government to help in areas which would never ever get the help. Parks, libraries, organizations like Tomchei Shabbos, Hatzalah, Ohel, [and] Chai Lifeline.”

“I said I’m going to do it at every single meeting until you give me a commitment to make it part of the meetings,” Felder recalled. The speaker relented and asked him for a month to make the change. “To this day, every stated meeting they pledge allegiance to the flag of America. I don’t like taking credit for things, but I’m delighted to take credit for that. It may be symbolic but I don’t have to announce I’m Jewish when I enter a room. I have a yarmulke and somewhat of a beard, so the very fact that an Orthodox Jew feels strongly about this country, and it’s public, was a highlight.”

He also pushed and succeeded in having a flagpole placed on Foster Avenue at a heavily trafficked entry point to Borough Park.

“The community should have an American flag right at the entrance to show how much we appreciate living in this wonderful country and the freedom it affords us,” Felder said. “That gives me real nachas.”

A recent controversy involved a five-minute grace period on parking meter tickets which the City Council passed over Mayor Michael Bloomberg’s veto. Felder answered the concern over how the city would make up the lost revenue with typical plain spoken logic.

“It’s a good question, but I don’t care,” he said. “What do I mean? Of course the city needs money, but if the city states this is a tax, like a real estate tax, a tax called ticketing, this is another story. The purpose of the ticket in the city is not to raise revenue but to encourage compliance. If that’s the case then you don’t drive people nuts.”

Close to 300,000 of all parking tickets given out in New York City are given in the five minutes immediately after the meter runs out.

“Could be likened to vultures waiting, which is crazy,” Felder said.

He praised Mayor Bloomberg with a Yiddish word, punctlich, which he said meant “efficient.”

“Everything has to be where it should be. He’s very focused and there’s nothing that he won’t really do himself. For example, I once saw him bend down in the bullpen [in his City Hall office] to fix some wires himself.”

Felder had a much publicized falling out with Assemblyman Dov Hikind, a Brooklyn Democrat, who supported Kevin Parker over Felder in the State Senate election. Felder was once Hikind’s chief of staff. About Hikind, Felder said:

“Let me tell you, before I got elected, I consulted with a rebbe I had in Israel and he told me if I run for office and succeed, I should make sure to focus on two things: one is make sure that I spend my energy and time serving my constituents with local problems, and [the other is to] not try to be the prime minister of Israel.” The latter was clearly a reference to Hikind’s penchant for public statements regarding events in Israel, far from his elected district.

Reached for comment about Hikind’s departure from the city council, Hikind was generous.

“As far [Felder’s] eight years in office, he was extremely dedicated, totally devoted to the community to make a difference, just like the period when he was my chief of staff. He was very serious about his job; he tried to make a difference and was straightforward with people. He was a public servant and he’ll do very well where’s he going,” Hikind said.

The split has been highlighted with the race for Felder’s seat [see here]. Hikind has endorsed community activist Joe Lazar, a former Regional Director of the New York State Office of Mental Health, while Felder is pictured with David Greenfield, a figure behind Teach NYS. During the interview Felder declined to speak about the upcoming special election to be held on March 23.

“When you talk about a statewide election, the community should be united to show strength, but in the community itself we’re talking about, there are capable people who are running. It’s not good and evil, I don’t see that, and I think this is a democracy and that’s what’s good about living in this community. The candidates offer different strengths to the community and the community is smart enough to choose someone who will be a good advocate on their behalf. Us, politicians, are sometimes delusional to think we have control [over] what the community does when it comes to elections.”

One thing Felder says he won’t miss is the “lack of privacy” that comes from being a public official.

“Today I was in shul for Maariv and somebody started talking to me about issue. If it’s a matter of life and death then there is nothing sacred, but it wasn’t. I don’t think I’m going to miss that,” he reflected.

Felder grew up a few blocks from where he currently lives and has spent most of his life with his constituents. Felder’s father, who was the rabbi of a small shul in Borough Park, passed away last year and Felder finished saying kaddish during the week before he took up his new position.

“My father was a special person,” Felder said, “His yahrtzeit is Purim. Someone said, seriously or kidding, that my father wanted to take care of me getting a real job before the year ended.”

The honor and the beauty: Appreciating what’s important