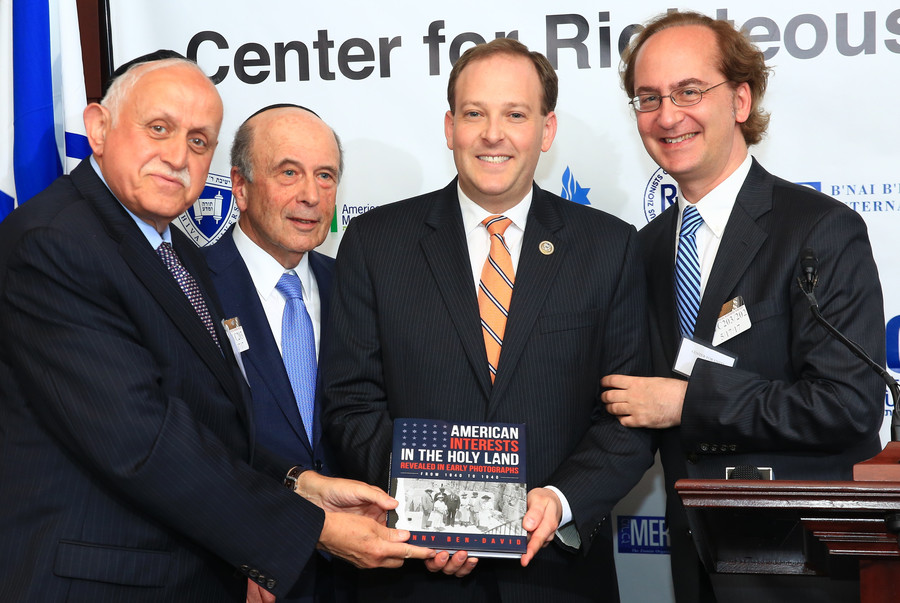 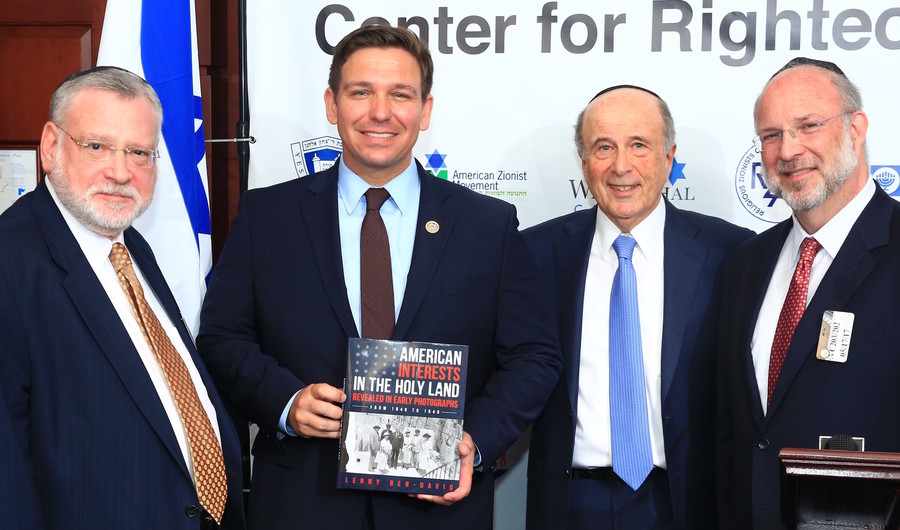 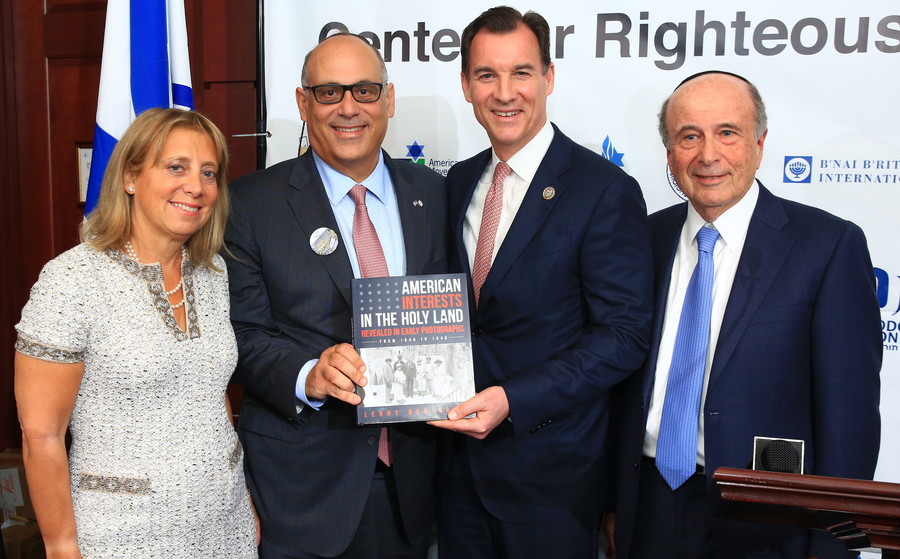 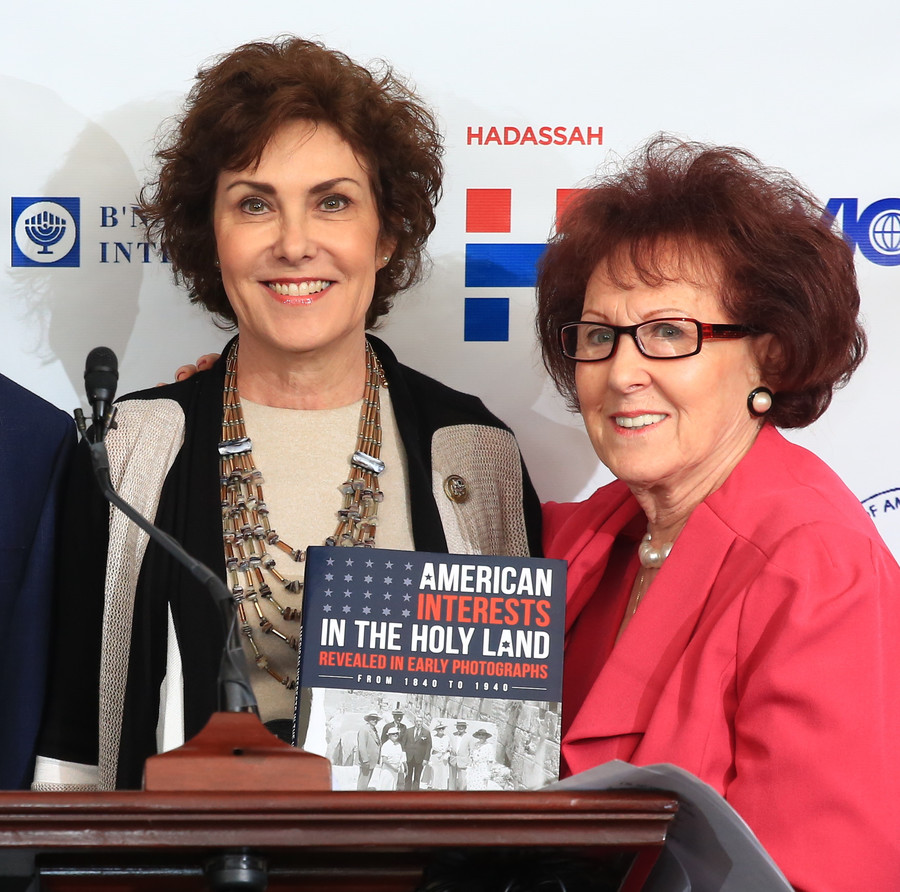 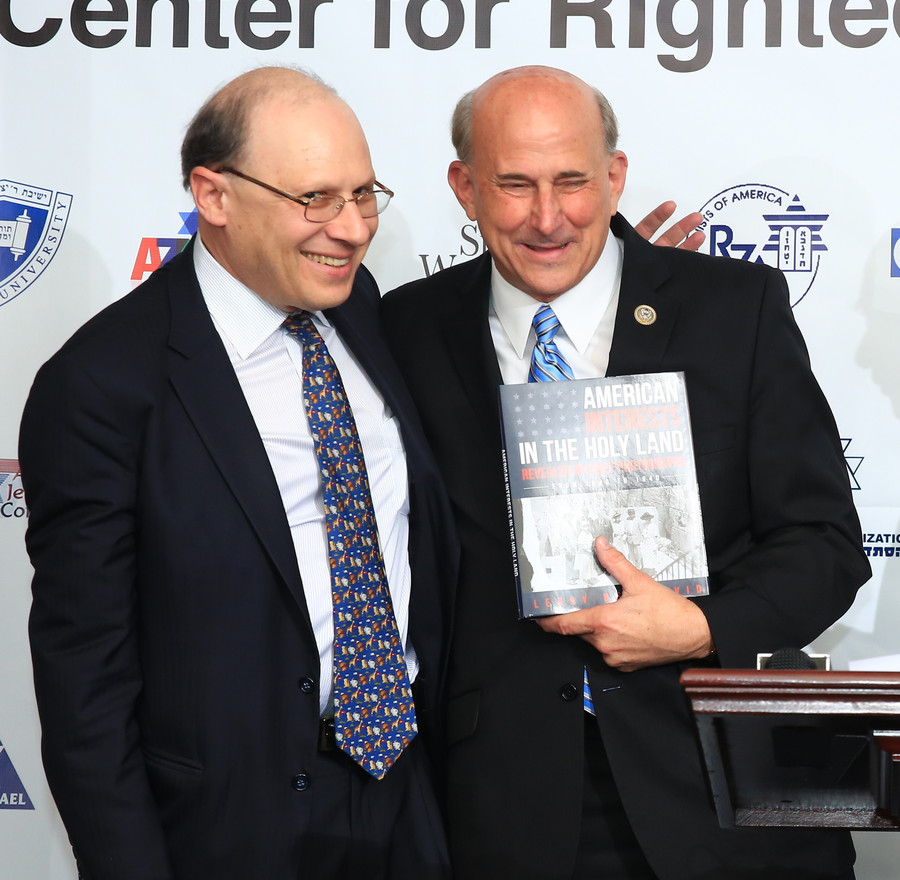 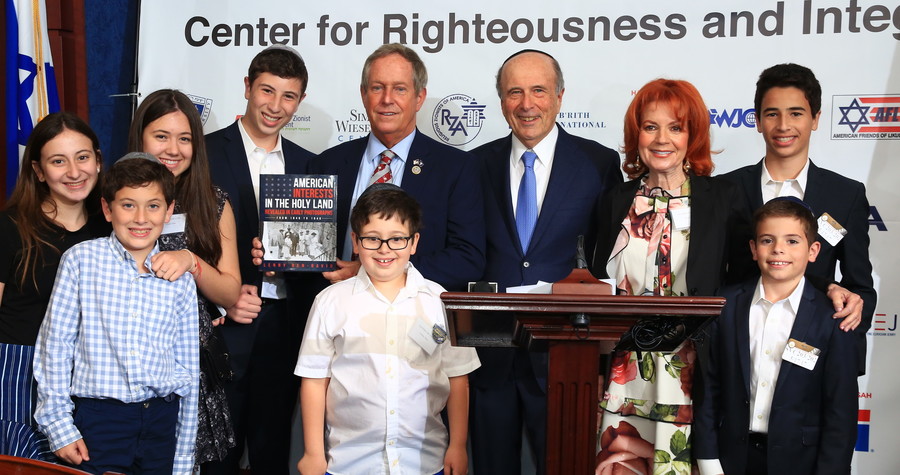 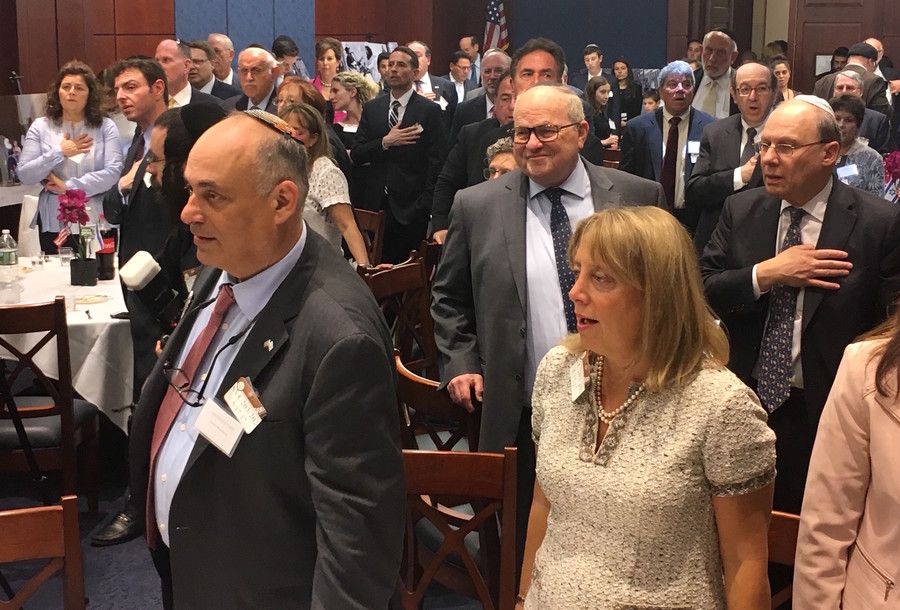 Participants in the Capitol’s Jerusalem 50 celebration pledge allegiance to the U.S. as the event began.
The Jewish Star / Ed Weintrob 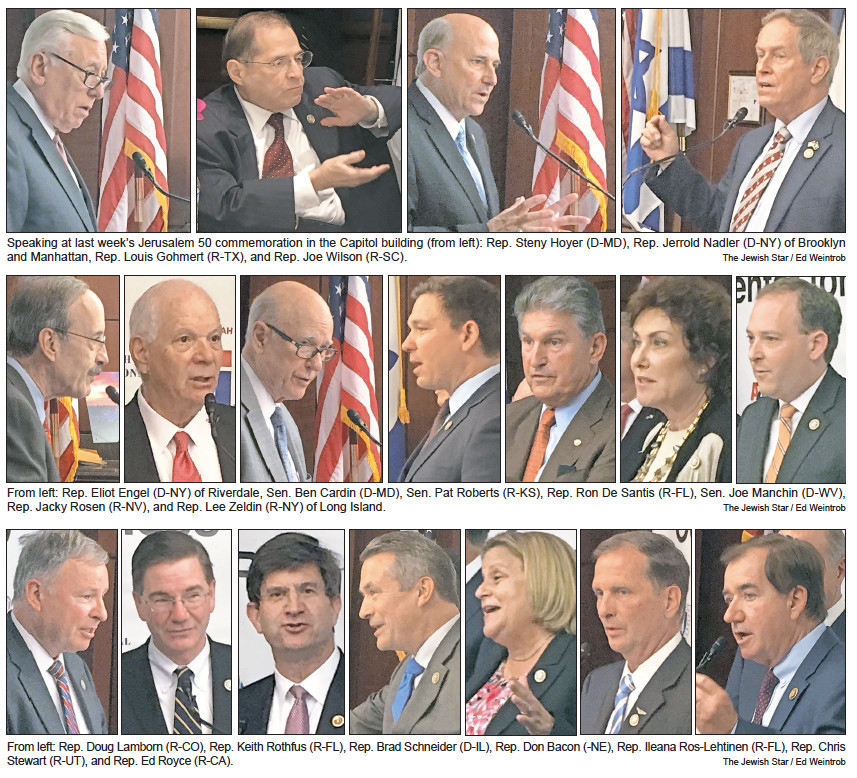 Twenty members of Congress professed firm support for Israel last week, addressing a “Jerusalem 50” luncheon in the Capitol that was organized by Martin Oliner, president of Religious Zionists of America and chairman of the Center for Righteousness and Integrity. Twenty-five diverse Jewish organizations participated.

Several of the legislators, gathered in Washington one week before the 50th anniversary of the liberation and reunification of Israel’s capital, urged President Trump to fulfil a campaign promise and move the U.S. embassy from Tel Aviv to Jerusalem. They strongly criticized the BDS movement, Iran’s terror-sponsoring and nuclearizing regime, and a United Nations that unfairly maligns the Jewish state.

Oliner, former mayor of the Five Towns Village of Lawrence, said he was hopeful that President Trump would keep his promise, despite the refusal, one day earlier, of his national security adviser, H.R. McMaster, to acknowledge that the Western Wall stood within sovereign Israeli territory. Presidential Press Secretary Sean Spicer similarly refused to link Jerusalem to Israel.

“Not recognizing Jerusalem as the unified and indivisible capital of Israel actually hurts the peace process because many Palestinian Arabs still believe that somehow Israel is a transient country that will eventually be wiped off the map,” said Rep. Ron De Santis (R-FL). “Moving the embassy there is a great statement to say Israel is here to stay.”

Rep. Lee Zeldin (R-NY), of Long Island, said the president’s trip “would present the perfect opportunity to announce that he’s going to deliver on a campaign pledge to move the embassy to Jerusalem” and “reinforce that Jerusalem is, without doubt, unquestionably, the capital of Israel.”

Rep. Doug Lamborn (R-CO) said that together with Zeldin and Rep. Mark Meadows (R-NC) he’s recruited fellow representatives to sign a letter to President Trump urging that he “recognize Jerusalem as the undivided capital of Israel and move the U.S. embassy from Tel Aviv to Jerusalem.”

“Let it be clear to all people,” said Rep. Steny Hoyer (D-MD). “Jerusalem is the undivided capital of the Jewish state of Israel.”

Rep Brad Shneider (D-IL) emphasized that the “unbreakable bond between the United States” and Israel depends on bipartisan support, with Rep. Eliot Engel (D-NY), of the Bronx, assuring that “support for Israel is bi-partisan and that’s the way it should be.”

Rep. Tom Suozzi (D-NY), of Long Island, welcomed the crowd with “Bruchim haBayim!” and pledged that “I’m 100 percent on the team. I’ll do whatever I can to be a strong defender of Israel through thick and thin.”

Suozzi reported that earlier in the day, with Rep. Francis Rooney (R-FL), he had introduced House Resolution 328 to commemorate the reunification of Jerusalem.

He recounted that on his first visit to Jerusalem, during the second Intifada in 2002, he met officials, toured important places, and prayed at the Western Wall. “It was an incredibly moving academic, policy-oriented trip,” Suozzi said.

He wanted to go to Mass at the Church of the Holy Sepulchre, “because if I go home and tell my mother that I was in Jerusalem and I didn’t go to church, I’m going to be in a lot of trouble.” But the church was not on the security-minded itinerary, so early the next morning, he and one other person snuck out to go to Mass.

“I was so proud of myself, that I would go without the armed guards, that I would go do this thing to be a good Catholic boy,” he said. “I was so full of myself. And then I walked outside and I saw the little girls getting on the bus to go to school that morning. And I realized, these are the courageous people — the people that have lived in Israel and who have made the desert bloom, who have kept the rule of law, who have kept democracy, who have fostered tolerance, and who are our best ally in the entire region.”

“From that day forward,” Suozzi concluded, “I decided that I would always do whatever I could to help the state of Israel.”

Rep. Jerrold Nadler (D-NY), of Brooklyn and Manhattan, who’d been chastised by segments of the pro-Israel community for his vote in favor of the Iran nuclear deal, was warmly received by Wednesday’s crowd.

Oliner welcomed Nadler as a good friend whom he first met over 50 years ago when they were members of Mizrahi Hatzair, a Zionist youth movement.

Nadler recalled that in the days leading up to the Six Day War, the Arab League voiced “blood-curdling threats” that the battle would be “a war of extermination — and without the nais it could have been.”

In the 50 years since then, “the U.N. has been a viper’s nest” that helps “maintain an anti-Israel industry” and keeps alive the refugee status of Palestinians “just as a weapon to oppose the end of the war against Israel.”

He pointed out that 100-million Hindus and Muslims on the Indian subcontinent were exchanged in 1947, around the time that Israel was being established. “It was settled,” he said. “Except in Israel … no one talks about refugees in the second generation or the third or fourth.”

Meanwhile, Nadler added, “UNESCO functions as a propaganda arm to say that the kotel” and other holy sites are not Jewish. “This is fiction,” he said.

UNESCO’s objective is to “to deny the Jewish ties to Jerusalem and to make way for the holy city to be part of any future Palestinian state,” said Rep. Ileana Ros-Lehtinen (R-FL).

“Jerusalem is the ancient spiritual, Biblical and historical capital of the Jewish state,” she said. “The legitimacy of not just Jerusalem as Israel’s capital but of Israel itself is being challenged daily.”

Sen. John Barrass (R-WY) said that “while Republicans and Democrats might fight about a lot of things, what we are 100 percent united on is that we are committed to reigning in the United Nations and the abuses we have seen.”

Sen. Ben Cardin (D-MD) asserted his opposition to BDS and his determination to push for action against Iranian violations.

“Support for Israel should be guaranteed in this year’s budget,” he said, including “funding the technology that makes Israel safer and the United States safer.”

Rep. Jacky Rosen (R-NV), talked about her daughter’s singing Rick Brecht’s song, “The Hope,” in Jewish camp, and pledged to keep the fire — the neir tamid, as her synagogue is named — alive for Israel.

Rep. Ed Royce (R-CA) recalled his visit to Israel during the most recent Gaza war. He saw Hamas tunnels under Israeli elementary schools, through which the terrorists planned to kidnap children and force Israel into bloody battles to win their return.

Four of the legislators said that their Christian faiths reinforced their support for Israel.

“If you think the solution in Israel is two states, your faith in your G-d is much too small,” said Rep. Louis Gohmert (R-TX).

Rep. Joe Manchin (D-WV), who joked that he doesn’t “have a lot of Jewish minors” in his district, recalled that two of his suitemates in college were Jewish. They were “devout Jews who supported Israel,” he said.

“I didn’t know a lot about it [and] I never saw this kind of excitement from a young person about the religion he was involved in — he gave me everything, and explained it to me.”

Today, Manchin said, “you have my unwavering support.”

“In the most dysfunctional political atmosphere that we live in,” he added, the two things that bring members of Congress together are support for the U.S. military and for Israel.

Rep. Don Bacon (R-NB) referenced a Biblical assurance “that those who bless Israel will be blessed,” proclaimed himself a “strong advocate for a unified Jerusalem,” and said, “I don’t believe in leaving any light” between the U.S. and Israel.

Rep. Joe Wilson (R-SC), raised in Charlestown, site of the oldest synagogue in continuous use in North America, “grew up with a great appreciation of people with a Jewish heritage,” he said.

“I feel like I’m among friends,” said Rep. Chris Stewart (R-UT), who shared memories of his several visits to Israel. Because of his “religious faith, and culturally … we are very close to the people of Israel.”

Oliner, vice-chairman of Religious Zionists of America, marveled at the turnout of Jewish organizations that don’t always see eye-to-eye as well as members of Congress, many of whom, while waiting for their turn their turn to speak, left to cast roll call votes and then returned.

“Most of all, I want to thank G-d for giving us Jerusalem,” he said. “Jerusalem has always been the capital of the Jewish people … and in our lifetime we’ve been able to accomplish that” again.

“Can you imagine if [the holy] sites were given to the barbarians who have destroyed one monument after another?” he asked. “It is inconceivable, but that threat to Jerusalem can’t go undeterred. We must guarantee that there isn’t an inkling that suggests otherwise.”

Oliner reminded attendees that “Jews have been in Jerusalem for 3,300 out of the last 3,500 years, making our claim to the city stronger than that of anyone else. As far back as 1818, British writer Robert Richardson estimated the number of Jews to be 10,000, twice the number of Muslims.”

When he recently visited with his grandchildren, Oliner pointed out how different Jerusalem is now compared to when it was divided prior to 1967.

“Back then, if you were Jewish, you could not enter the Jordanian-occupied Old City,” he said. “Now it is a haven for Jews, Christians, Muslims, and those who are still trying to figure themselves out. We mark Jerusalem Day due to the miracles that made this situation that was only dreamed of before a reality.”