Can there be peace as Palestinians teach hate? 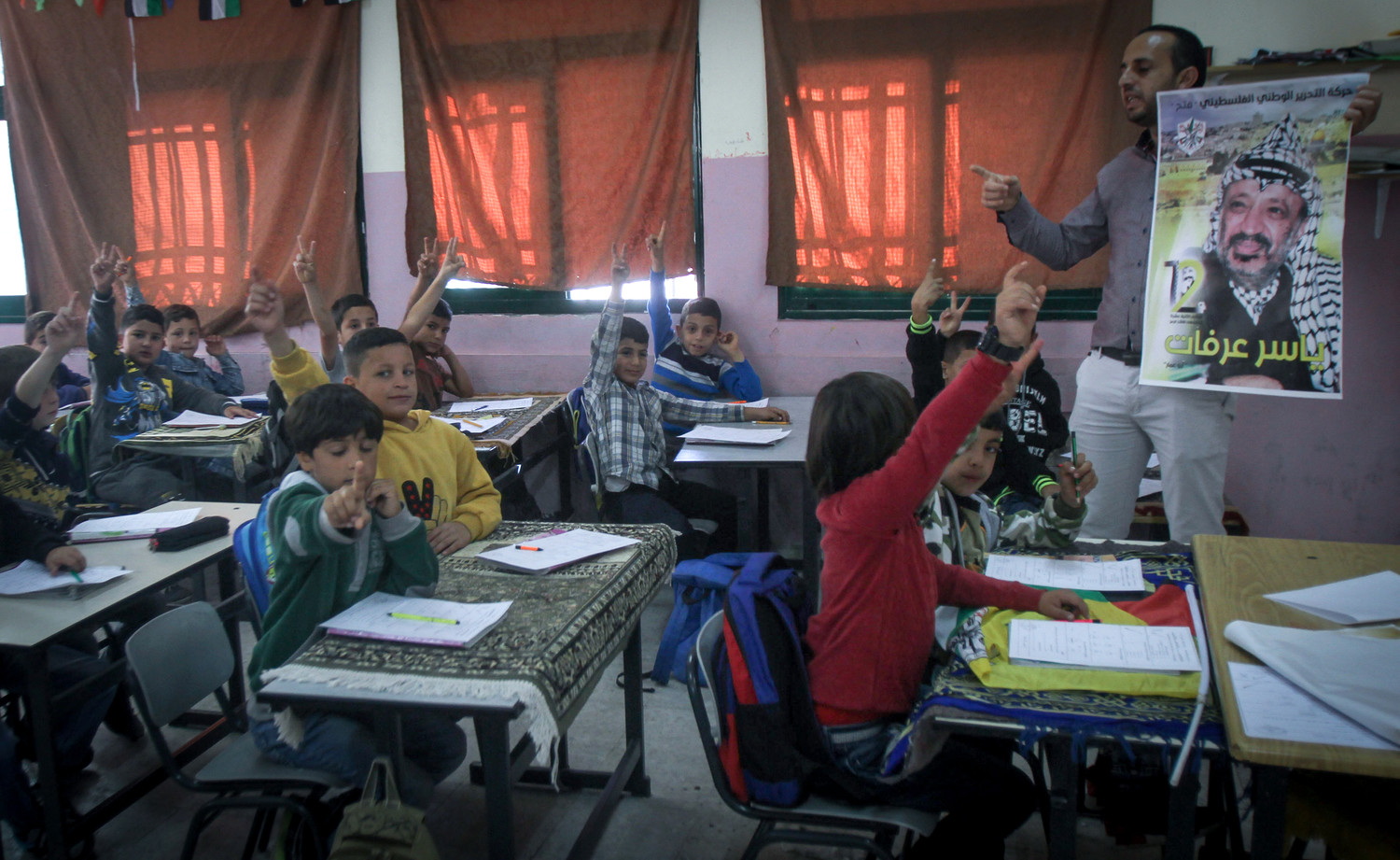 A Palestinian teacher lectures at the Salem School for Girls in Nablus in 2016 on the life of the late Palestinian President Yasser Arafat on the 12th anniversary of his death.
Nasser Ishtayeh/FLASH90
By Israel Kasnett

Palestinian incitement against Israel runs rampant in the West Bank and Gaza, with school textbooks full of hatred and maps of the Middle East that erase Israel. The Palestinian Authority constantly incites against Israel in its television and radio programs, so it comes as no surprise that Palestinian society regards Israelis as the enemy.

It’s also no shock that many Palestinians have carried out terrorist attacks on Israelis. One attack stands out for Micah Avni.

Shortly after 10 am on a beautiful Tuesday morning on Oct. 13, 2015, the No. 78 Egged bus turned the corner in Jerusalem’s Armon Hanatziv neighborhood. At a bus stop, two Palestinian men — Baha Alyan and Bilal Abu Ghanem, residents of the adjacent neighborhood Jabel Mukaber — boarded, and began shooting and stabbing indiscriminately. A security guard at the scene overpowered and killed Alyan. Ghanem locked the bus doors to stop security forces from boarding, and passengers from fleeing. Police officers opened fire at him from outside the bus. He was arrested and eventually jailed.

Avni’s father, Richard Lakin, 76, was on that bus. He was shot in the head and stabbed multiple times. Evacuated by an emergency medical team, he was hospitalized in the ICU at Hadassah Ein Kerem Hospital in Jerusalem, where he underwent multiple surgeries. He died two weeks later on Oct. 27.

Lakin was a former principal at Hopewell Elementary School in Glastonbury, Conn. He wrote a book in 2007 titled Teaching as an Act of Love: Thoughts and Reflections of a Former Teacher, Principal and Kid. Upon moving to Israel 32 years earlier, he and his wife opened a business focused on teaching English to people of all ages and backgrounds, including Palestinian children from the area. He taught up until the day of the attack.

Palestinian Media Watch, a research institute that studies Palestinian society from a broad range of perspectives, discovered that a Palestinian public library in El-Bireh, 15 kilometers north of Jerusalem, recently held a “cultural evening” titled “In the Presence of the Martyrs,” at which it honored four terrorists. Among them was Alyan.

“The P.A. is teaching its kids that murdering Israelis and Jews is as basic a value as reading. I’m appalled, but unfortunately not surprised, that the P.A. contaminates the value of reading with their twisted value of killing Israelis.”

Avni is incensed that the P.A. glorifies terrorists, especially the one who killed his father. Palestinian Authority leader Mahmoud Abbas met with Alyan’s father and commended his actions on P.A. TV. The P.A. also pays Alyan a monthly stipend and established a summer camp in his name.

The fact that a library was used for incitement especially bothers Avni.

“My father loved teaching children to read and to love books,” he said. “The Hopewell school set up a library where it teaches children kindness. If you juxtapose this with the library in the P.A., it drives home the moral challenge of us as a people who are educating for peace, and tragically, the P.A. is educating its children to hate and kill. With this vicious cycle of hatred and killing, you have to go to the root of it.”

While PMW works to expose Palestinian incitement, another organization, IMPACT-SE, focuses specifically on this issue. According to its website, IMPACT “monitors and analyzes education. It employs international standards on peace and tolerance as derived from UNESCO declarations and resolutions to determine compliance and to advocate for change when necessary.”

Its aim, it says, “is to prevent radicalization of children and youth as the most vulnerable members of society.”

He continues, “Palestinian students are educated for jihad, martyrdom and constant war. There is now a systematic attempt by the P.A. — after looking at all 173 books across the curriculum — to radicalize generation after generation of young Palestinians to keep them ready for violence, to explain to them what that violence should look like and the fruits of what that violence should be. What they are doing is saying ‘sacrifice yourselves.’ It is child abuse on a grand scale.”

Palestinian students believe what they are being taught because, as Sheff asserts, “textbooks are authoritative.”

The 2016 curriculum was supposed to be reformed. Instead, according to Sheff, “there is real radicalization in these textbooks. We have looked into every single line of the old and new Palestinian curriculum. And the most bizarre element of this is that it is being paid for, to a large extent, by the European Union and European nations.”

He says he shows the textbooks to European leaders, who appear shocked. “There is a paradigm which they are very much a part of. They need to support the Palestinians and inconvenient truths are not part of that paradigm.”

Some countries, like Britain, acknowledge the problem, he says, “but what they will do with this is a question. Do they have what it takes to take on the Palestinian leadership?”

A recent US bill aims to “require the Secretary of State to submit annual reports reviewing the educational material used by the Palestinian Authority or the United Nations Relief and Works Agency for Palestine Refugees in the Near East in the West Bank and Gaza, and for other purposes.” Sheff says he “hopes it is going to pass.” While Europe is more important to Sheff, since it pays for the curriculum, “the U.S. absolutely needs to have the legislation in place for if and when they are re-involved in any peace process.”

Avni lambasts the Palestinian Authority for its incitement. “That is the screaming outrage of this: It’s evil and wrong. Morally, it is corrupting an entire society and bringing us farther away from ever reaching a peaceful arrangement.”

He says he has offered “numerous times” to speak at schools in eastern Jerusalem, where students could be exposed to the victim’s side. He has consistently been rejected.

“Parents aren’t willing for their children to hear,” he says. “Even when a school approved it, parents overruled it.”

“Tragically, being turned down again and again clarifies the point over how they are educating hate and terrorism,” he laments. “It’s important that we in Israel, as well as leaders around the world, understand that as long as the Palestinians are teaching hatred within the core of the education system and in schools and libraries, you can’t achieve peace.”