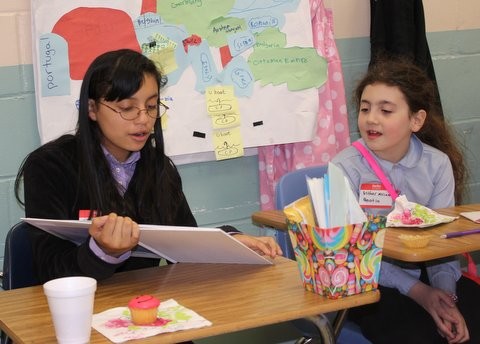 CAHAL’s Grade 7-8 class in the Torah Academy for Girls embarked on a wonderful year-long project that broadened their horizons and connected them to another community.

The girls were matched with a third grade Little Sister class in Shalsheles Bais Yaakov, a kiruv school in Boro Park. Each student received a Little Sister pen pal and stayed in touch with her during the year by sending letters and prizes.

For Purim, the girls decorated and sent elaborate shaloch manos and even made a video of a funny Purim play to share the spirit of the holiday with their Little Sisters.

The project culminated when Grade 7-8 in TAG invited their Little Sister class to attend their Hebrew Book Fair on June 10. The fair showcased each student’s original Hebrew Children’s book, which she had written and illustrated.

Excitement ran high as the students from Grade 7-8 waited for their Little Sisters to arrive. At long last, their bus pulled up and the third graders entered the TAG classroom. Each TAG Big Sister introduced herself, brought her sister to her seat and read the story she wrote to her Little Sister. It was beautiful to watch the third graders slowly open up to their Big Sisters as they listened to the book being read to them and chatted about what they had in common.

Cupcakes and drinks were served to each pen pal pair.

Following the book reading, the TAG girls decorated canvas bags with their Little Sisters and several pairs exchanged bags with each other or autographed their sister’s bag.

The event ended with the third graders presenting gifts to their Big Sisters and both sides promised to keep writing over the summer.

As TAG’s Grade 7-8 class walked their sister class to the front door, there was a genuine sense of camaraderie and friendship between the classes. They took pictures together and waved goodbye.

Although the official school year is over, the lessons of unity, patience, selflessness and sensitivity learned from this pen pal project will stay with TAG’s Grade 7-8 for a long time.