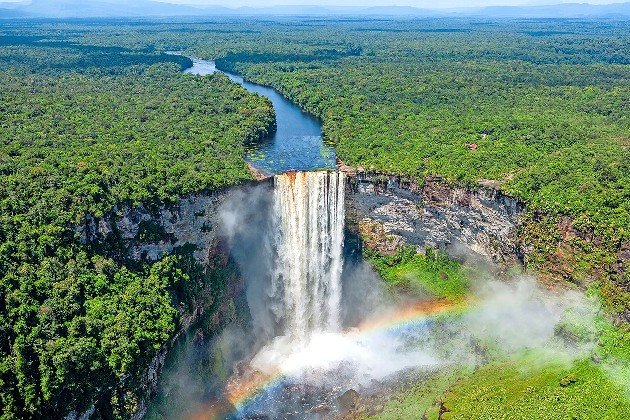 Good for the Jews? Aerial photo of Kaieteur Falls in the jungle region of Kaieteur National Park in Guyana.
Overflightstock

Anti-Israel propagandists periodically suggest that Jews should have a state, just not in “Palestine.” I thought of that when I came across a short note written on Nov. 26, 1938, from President Franklin Roosevelt to the US State Department.

It was less than three weeks after Kristallnacht, when Roosevelt asked Undersecretary of State Sumner Welles if the State Department had any information “in regard to possible places for Jewish colonization in any part of the world.” He said he didn’t want “any extensive memorandum — just what you happen to have on hand.”

The document impressed me as odd. It appeared to be a reaction to the pogroms in Germany and a desire to find a place for Jewish refugees to go other than the United States where they were not welcome. This was a time of widespread xenophobia and anti-Semitism in America that led to refugee quotas that prevented many Jews from escaping Hitler’s “Final Solution” in Europe.

It was also strange that Roosevelt would think the State Department had material lying around suggesting options for Jewish settlement. Nevertheless, the department managed to produce a response in just two days, so material was either readily available or quickly collected. More interesting was that the document Welles provided suggests he interpreted the president’s interest as not just finding a haven for refugees but locating a suitable homeland for the Jewish people.

he 12-page memorandum makes for depressing reading as it takes the president on a world tour that documents the resistance to admitting Jewish refugees.

It starts with Great Britain and Mandatory Palestine. The document notes the British were admitting 75 German refugees a day and didn’t want it to be disclosed to the public. It also reviews Jewish immigration to Palestine starting in 1933 at 30,327 and peaking in 1935 at 61,854 before falling in 1937 to 10,536. The Colonial Secretary, the report said, had told Parliament the government was considering the admission of 10,000 German Jewish children.

Australia was admitting 5,000 refugees a year and, like Britain, was “anxious to avoid any publicity concerning it.”

The department had no details from Canada or New Zealand; France, Belgium and the Netherlands were unwilling to allow the settlement of refugees in their colonial empires; and South Africa was ruled out because of “strong and increasing” anti-Semitism there.

Small-scale settlement was thought possible in the British colonies of Tanganyika, Kenya, Northern Rhodesia and Nyasaland.

According to the memo, “Many proposals have been made for the establishment of a new Jewish homeland in Lower California [Baja], some proposals linking it with a settlement of the controversy over expropriation of the property of the petroleum companies.” The area had significant problems with a “lack of water, natural resources and communications”; nevertheless, “these proposals persist.” The idea would have required support from Mexico, which had adopted stricter immigration legislation and was expected to have a “strongly unfavorable” attitude toward the proposals.

Cuba made no commitments and refugees saw the island as a stepping stone to the United States, so it was not a viable place for settlement.

Haiti was open to refugees but did not have the absorptive capacity for large-scale settlement.

The Dominican Republic was one of the most open to refugees, offering to take in from 50,000 to 100,000. The department was skeptical because only 20 of 8,000 applicants had received visas to that point and planned to send an expert to investigate the possibility of large-scale settlement. Much later, the DR would prove to be a haven for a smaller number of Jewish refugees, notably the 500 who settled in Sosua.

Honduras was prepared to accept no more than 1,000 refugees provided they engaged exclusively in agriculture and had adequate means of support.

Costa Rica, which less than 10 years later voted for the establishment of a Jewish state, was not hospitable in 1938. “There is said to be considerable anti-Semitic feeling in the country,” said the report. Nevertheless, the president expressed sympathy towards admitting refugees, and a “substantial area of land for colonization” was purchased by the Refugee Economic Corporation.

Elsewhere in Central America, Nicaragua accepted “a fair number of refugees,” but there was no further information. Salvador would not accept any refugees, and no information was available about Guatemala or Panama.

In South America, Colombia admitted several thousand refugees but was not expected to admit more. The situation was worse in Ecuador, where the government was angered after Jews admitted the year before as agriculturalists moved to cities to become merchants. Intervention from the local Jewish community was needed to prevent their deportation.

Argentina had, and still has the largest Jewish population in Latin America — 350,000 in 1938, 175,000 today. The country imposed stricter immigration regulations; nevertheless, the expectation was that “the government will continue to admit a not inconsiderable number of refugees.”

Paraguay was willing to take “a considerable number of refugees provided [it] can be assured that they will not become a burden on the state and that they will be prepared to devote themselves exclusively to agriculture.”

Peru was more open to refugees; however, like several of the other countries, the government was upset that they were settling in the cities rather than sticking to agriculture and insisted that plans be implemented to prevent this before increasing the number of refugees it would accept. Still, it was not viewed as a candidate for large-scale settlement because of its limited absorptive capacity.

No specific information was available regarding Venezuela or Uruguay beyond the latter adopting new immigration restrictions. Chile’s government was generally unfavorable towards admitting refugees; settlement possibilities in Bolivia were limited. Brazil, however, was seen as having the greatest potential for the settlement of refugees. The government had not been willing to allow substantial numbers of refugees into the country but was “becoming considerably more liberal with respect to the admission of certain categories of Jewish refugees.”

one of these reports sounded promising, so what location did the State Department identify as a possible location for a new Jewish homeland?

The answer is British Guiana.

For those who have no idea where it is, the country is now called Guyana and was once a British colony on the northern coast of South America. The report said: “An area of at least 10,000 square miles in the interior is stated to be available for colonization if ‘careful surveys by experts indicate its suitability.’ Agricultural development in this area has hitherto been prevented by unfavorable conditions and lack of communications.”

“Jewish and other unofficial sources” in the country believed British and French Guiana could be taken over, possibly as part payment on the war debts, as a new Jewish homeland.” Dutch Guiana in the middle was a potential problem, however, and “very careful study and extensive surveys would be essential to serious consideration of such a project.”

The president apparently did not act on the contents of the report and, to my knowledge, made no effort to create a Jewish homeland in Guiana.

Pity, we might all be speaking the King’s English and Guyanese Creole.

Mitchell Bard is a foreign-policy analyst and an authority on US-Israel relations who has written and edited 22 books, including “The Arab Lobby, Death to the Infidels: Radical Islam’s War Against the Jews” and “After Anatevka: Tevye in Palestine.”