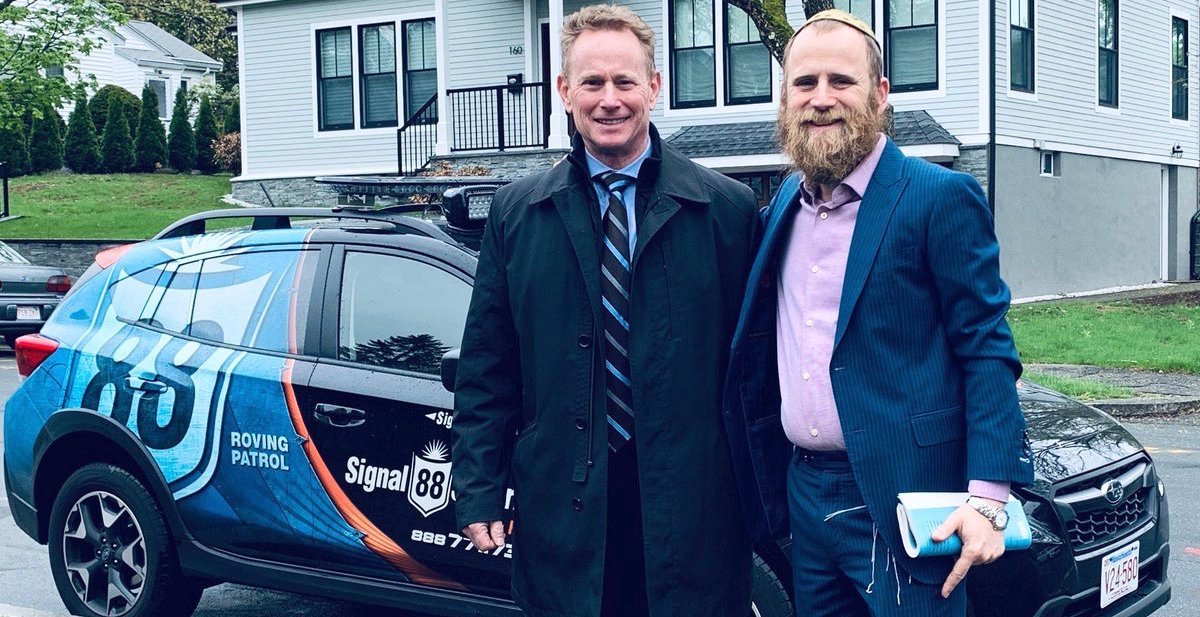 Bob Kinder, who served six years in the U.S. military in Iraq and Afghanistan, and is president and CEO of the safety and security consulting firm Talon Solutions, with Rabbi Mendy Krinsky.
By Jackson Richman, JNS

After a series of synagogue shootings and arson attacks, more synagogues are debating the advisability of deploying armed security.

Rabbi Moshe Bleich, who runs two Chabad on-campus centers, told JNS there are different approaches to security among the many Chabad Houses around the world, but noted that all centers are taking new precautions

Chabad emissaries in Massachusetts have undergone a Civilian Response to Active Shooter Event (CRASE), according to Rabbi Bleich. According to the training organization’s website, “topics include the history and prevalence of active shooter events, civilian response options, medical issues, and considerations for conducting drills.”

“We pride ourselves as being a home for every Jew — a welcoming environment for everybody,” he said. “We’re not looking to scare anybody off. The last thing we would want is that people should not feel safe and not feel comfortable to come to a synagogue.”

“On the other hand,” he continued, “we need to make sure that everybody will feel safe and feel comfortable going to a synagogue.”

Rabbi Mendy Krinsky, who runs the Chabad center in Needham, Mass., echoed that sentiment: “My message to all rabbis is that security and a warm, welcoming environment are not mutually exclusive. People are more comfortable and at ease in what they feel is a safe space. While ensuring that our places of gathering and worship are safe and secure, let’s keep our focus on what our added value really is: inspiring and uplifting people, and bringing more light into the world.”

Bob Kinder, who served six years in the U.S. Armed Forces in Iraq and Afghanistan and is currently CEO of the security consulting firm Talon Solutions, told JNS that “surveillance, all that does is capture an image of the perpetrator, whatever they’re doing, their nefarious activities. If you do not have an operational arm that can interdict very rapidly, then the best surveillance systems in the world won’t do you any good if your objective is to prevent an attack.”

“Surveillance systems and hardening a synagogue or a JCC or another Jewish institution is absolutely critical just to keep out would-be assailants,” he continued. “But unless you have somebody who can rapidly react to that adversary, you’ll find it’s just too late.”

That is not to say all Jewish institutions need to have armed personnel, said Kinder, as defense and security is all about “risk appetite,” he said, adding that “and we’re certainly at risk.”

He cited the April 27 synagogue shooting at Chabad of Poway and at Oct. 27 shooting at the Tree of Life - Or L’Simcha Synagogue in Pittsburgh as examples of what can happen when there is no armed guard to stop an assailant.

Kinder, who is not Jewish, instructs institutions like synagogues and community centers to “make it more difficult for an assailant to injure your congregation or your children.” “Most of these people, quite frankly, are cowards that are attacking, and they will bypass something that they consider to be a hardened target,” he said.

Recently, Elan Carr, the U.S. Special Envoy for Monitoring and Combating Anti-Semitism, said that synagogues and Jewish institutions should consider having armed guards.

“We live in a time of danger,” Carr told Jerusalem Post editor-in-chief Yaakov Katz in an interview at the Global Coalition 4 Israel Conference. “Any synagogue, every JCC should have guards. G-d willing, may they never be needed, but they should be there.”

Organizations such as the Orthodox Union and the Jewish Policy Center have encouraged Jewish institutions, especially synagogues, to have armed personnel.

“The OU advocates for resources [in the form of federal and state grants] to support security measures, including guards, at synagogues, school and other Jewish institutions,” said Nathan Diament, executive director of the group’s advocacy center, said “the OU supports each institution making its own determination as to which security measures suit its specific needs best.”

Kinder cited a Reform synagogue in Brookline, Mass., where congregants were hesitant to have someone with a gun protecting the place. He was asked to provide security for an interfaith event and, after accepting their offer, was asked if “he would feel comfortable being unarmed.”

“My response was, ‘I’m a professional. These are my credentials. If your purpose is deterrence and to secure the people inside, you are better off with me being armed and able to respond.’”

In the end, Kinder was armed. In fact, he received an email after the event informing him that the congregation requested him back.

“It’s the internal tension that I think probably synagogues and day schools all over the country are dealing with,” he said of elevated fears after Pittsburgh and Poway.

A major issue associated with enhanced security is the price. However, Kinder said that CJP grants have been written, including a recent one to a Chabad. This year, CJP offered 14 Jewish day schools and two Jewish Community Centers physical security grants and is in the process of giving them to 37 Jewish preschools, CJP associate vice president and director of security operations Jeremy Yamin told JNS.

“While CJP has not been able to accommodate every request for physical security investments, we are in the process of raising funds to help meet the community’s increased needs,” he said, adding that the organization assists Jewish institutions in applying for the Nonprofit Security Grant Program, which provides “funding to support target hardening and other physical security enhancements for nonprofit organizations that are at high risk of a terrorist attack,” according to the Federal Emergency Management Agency.

While the United States is not like Europe, where armed personnel are now routinely outside synagogues, Kinder said, “There have been two shootings exactly six months apart for individuals that thought they were in a sanctuary, a place of worship and unfortunately, there was nobody there to stop them.”

“I would encourage people to consider how catastrophic it would be if a situation like that happened, and whether or not they had they done everything they could possibly do to prevent that atrocity from occurring.”