The menorah wars: Cheers to Chabad, and L.I. 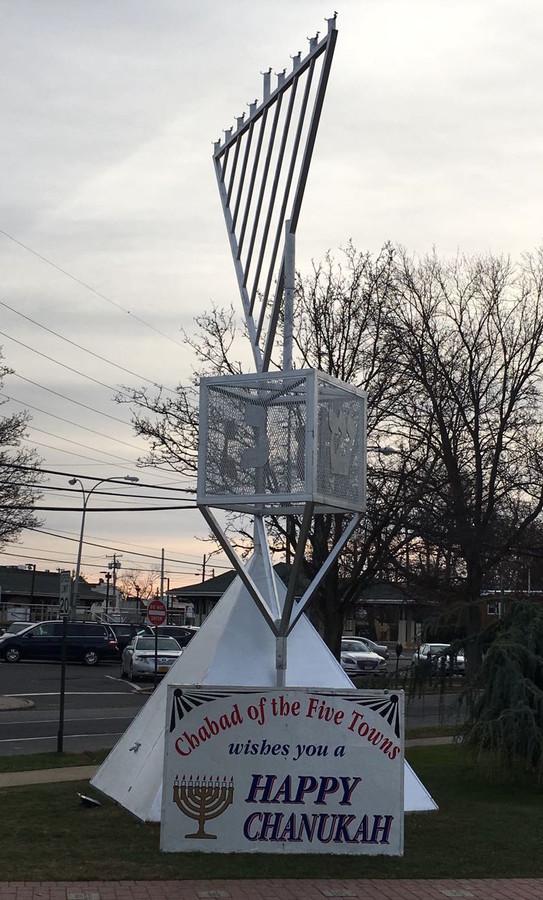 A chapter titled “The Menorah Wars” is at the center of a comprehensive history of the Chabad movement in the United States, “The Secret of Chabad: Inside the world’s most successful Jewish movement” (Toby Press, 2015) by Rabbi David Eliezrie. This chapter details the struggles that followers of the Chabad movement engaged in to win public acceptance for the public display of menorahs during the Chanukah festival.

“Officially the menorah wars were about issues of church and state, but they were a masquerade for much deeper issues,” Rabbi Eliezrie told your columnist. “First it was a conflict over Jewish identity in America. As Charles Silberman, the noted Jewish sociologist describes the attitudes of American Jewry in the post- war era — ‘shah, don’t be so Jewish’.

“Chabad assertiveness, the moving of Jewish holiday celebrations to the public square, shattered that idea. Liberal Jewish groups who wanted the status quo of a subdued low profile Jewish identity took up the battle, using arguments of church and state as an excuse to exclude religion from the public square.

“Secondly, the Jewish establishment was opposed to Chabad’s emergence as a major player in the American Jewish community. The opposition to the menorah was a reaction to the independence of Chabad on the modern American Jewish communal scene. They did not mind a quiet docile Orthodox community that took care of its domestic needs. However, they did not want a vibrant dynamic Orthodox group that wanted to have a role on the central stage of the community. Opposition to the menorah was an effort to clip the wings of Chabad.”

Among the pioneering local efforts on Long Island to give the Chanukah menorah a high public presence were those of Rabbi Zalman Wolowik of Cedarhurst and Rabbi Anchelle Perl of Mineola.

“Many years ago, the ball used for the New York City Times Square New Years eve ball drop was designed by a Jewish family, owners of the Artcraft Strauss Sign Company,” Rabbi Perl told your columnist. “We approached them and they built, for gratis, Long Island’s tallest menorah, 18 feet tall, based upon a modern depiction of the Rambam (Maimonides) design. The actual drawings were made by a local artist, Sybil Trigoboff, of North Bellmore. This menorah stood for many years on Old Country Road in Westbury, thanks to the generosity of Alan Fortunoff.”

“Till 1995 there were no public menorahs anywhere in the Five Towns, when we established the Chabad shul here,” recalls Rabbi Wolowik. “We requested of the then mayor, Andrew Parise, obm, to allow for a publicly displayed menorah. He jumped on the idea and the rest is history. Today we have one on West Broadway and Rockaway, in the Mayor Andrew Parise Cedarhurst Park, in front of the Chabad shul on Maple Avenue, in Hewlwtt on the intersection of West Broadway and Broadway, on Central and Linden in Woodmere — with more to come next year.”

When one considers the situation but a few short years ago and, of the public acceptance of these menorahs, especially of the one in Cedarhurst (which is located just a few feet from the village Christmas tree and crèche) as well as the now long time acceptance of a community eruv, we should all be grateful for the peace that prevails among all religious groups in our area.

In concluding his chapter on this subject, Rabbi David Eliezrie informs us of the following:

“Some years ago, at a meeting of the board of governors of the American Jewish Committee in New York, Professor Jonathan Sarna was asked if Chabad was causing division in the Jewish community. Sarna responded , ‘Anyone writing the history of American Jewry in the 21st century would have to say that the most remarkable development of Jewish life here was the rise of the Chabad-Lubavitch Movement.

“Lubavitch teaches all of us how to take care of our weak spots. They set up Chabad Houses on campuses for students and tend to the poor and elderly and those on the edge of the community, to those who can’t be reached and must be reached. We must be grateful to Chabad for saving thousands of Jewish souls who would have been lost to the Jewish people forever if not for the late Lubavitcher Rebbe’s efforts.”

History is almost always written in the past tense. However, a forward glance is the lesson that we should learn from all of these past experiences. Last week, Dr. Rafael Medoff, one of America’s leading historians on Jewish history, made the following observation concerning the recent vote to abstain at the U.N. on the issue of Jewish settlements in Judea and Samaria.

“There are Hebrons in Connecticut, Illinois, and Kentucky. The are Jerichos in Arkansas, Indiana, and Vermont [and on Long Island]. There is an Ephrata and a Tekoa in Washington State. The list goes on and on. The only state that does not have at least one town named after a biblical location is Obama’s home state, Hawaii. Perhaps that fact adds a touch of irony to the outgoing president’s decision to refrain from vetoing the U.N. resolution condemning Israel.” Indeed it does!

Happy Chanukah, and please do learn from its history.