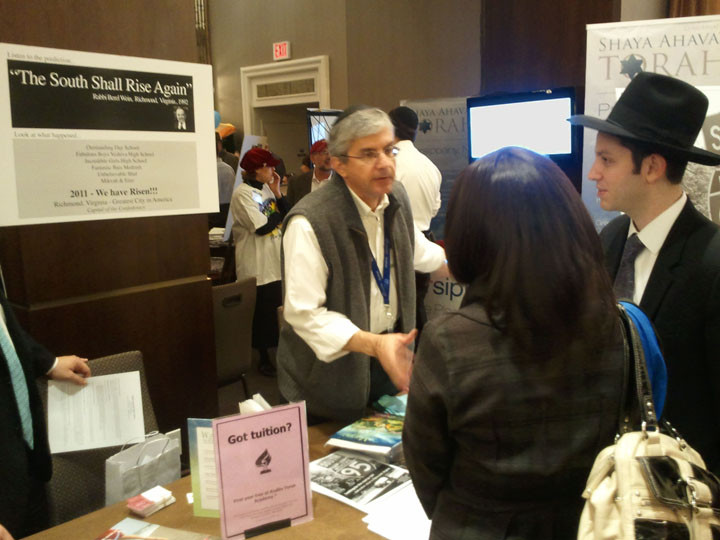 There is affordable housing and day school tuition breaks, but can South Bend, Indiana, really coax a young Jewish family to leave the comforts of New York? “I thought I’d be living in New York for the rest of my life,” said Moshe Gubin, 34, a former resident of Kew Gardens Hills. “I was visiting my in-laws in South Bend and my wife wanted to live near her parents,” Gubin said. Although the move meant a pay cut and a long commute to Chicago for work, Gubin is not looking back. He attended the Orthodox Union’s Emerging Jewish Communities Fair on March 27 at the Grand Hyatt Hotel in Manhattan. The event was facilitating New York Jews to move across the Hudson River and beyond.

“I have a big lawn, a four bedroom home with a two-car garage for only $89,000,” Gubin said. While South Bend does not come close to New York in terms of amenities, the basic Orthodox services such a day school, mikvah, and eruv are a requirement for participation in the fair. “There has to be an infrastructure for the community to grow, and the other requirement is incentives, such as job opportunities and discounts in tuition and housing,” said Frank Buchweitz, OU special projects director. The third annual fair drew 37 communities from Maine to California.

Alongside Arizona and Kansas, five Long Island communities attended the fair, with real estate as the focus of their pitch. “These communities said to us that they are also OU members and are trying to grow with the same efforts,” Buchweitz said. The five Nassau communities were Long Beach, Merrick, Oceanside, Plainview, and Roslyn.

“We are an out of town community that’s only 25 minutes by train from Manhattan,” said Alan Sonnenklar, representing Roslyn Synagogue. With its proximity to established Jewish communities on the North Shore, Sonnenklar said that Roslyn offers a blend of Jewish backgrounds mirroring Long Island. “In our shul, Persian elders talk Torah to young Ashkenazi kids,” Sonnenklar said.

Oceanside presented itself as an affordable alternative, promoting the virtues of living in a smaller community. “We are not looking to be the ‘Sixth Town,’ we are looking to be Oceanside,” said David Welner of Young Israel of Oceanside. “There is a certain camaraderie in a 200-member shul that you can’t get with five thousand people. We encourage leadership and give them a say,” Welner said.

In the past year, 35 young families moved into Oceanside, and Welner promises to help along every step. “We hold their hand from their very first Shabbat to their moving day. We saved one family $35,000 on their home by negotiating,” Welner said.

Among the estimated 1,100 attendees, Aaron Lapian, 31, spoke of the high cost of living in New York as his reason for moving. “Flatbush has high prices and it’s too fast paced. We’d like to afford a nice yard and a community where people will know you.”

The culture shock was evident for actuary Mark Press, who left White Plains five years ago for Richmond, Virginia, where his Christian neighbors greet him on the street daily. “The people are religious and they know what I stand for. When people are nice to you, you ask what’s their angle, but that’s the South,” Press said.

The difference in culture was a selling point for Rabbi Uri Topolsky, representing the lone modern Orthodox synagogue in Louisiana, Congregation Beth Israel in the New Orleans suburb of Metairie. The 104-year-old synagogue took on 12 feet of water during Hurricane Katrina, but is seeking to recover with goal-oriented young families.

“We have a New York Deli in New Orleans, but where else can you be part of a shul, community, and city rebuilding themselves?” asked Rabbi Topolsky. “We are advertising a mission of rebuilding and making a difference,”