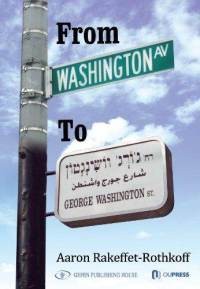 Among American Jewry’s premier biographers, Rabbi Aaron Rakeffet-Rothkoff’s name stands out as one of the most scholarly, accurate and honest in both intent and content.
Among his subjects are, Rav Joseph Soloveitchik, Rabbi Dov Revel, and Rabbi Eliezer Silver, all of blessed memory. Now comes the ultimate for a biographer, an autobiography and memoir.
“From Washington Ave. To George Washington Street” by Gefen Publishing / OU Press, in his own words the exciting acts, details the activities and actions witnessed by, and participated in by Rabbi Rakeffet during his over half century of service to American and world Jewry, here, in Russia, and in Israel.
This wide ranging book of over 400-pages goes into great detail concerning family, education, avocation and communal responsibilities and the tasks that resulted in change in the lives of many who came to benefit both directly or indirectly from the rabbi’s actions. Over 100 pages deal with his activities involving the liberation of Jews from communism. This will be the focus of my review.
With this week’s annual convention of Agudath Israel of America, interest in Agudah’s past activities on behalf of Jews oppressed under communism, as detailed by Rabbi Rakeffet, should be of keen and timely interest. Especially of interest should be Rabbi Rakeffet’s relationship with longtime Agudah leader, Rabbi Moshe Sherer of blessed memory.
Sometimes a hard admonition can go a long way toward bringing out results that result in positive gain and benefit to untold numbers of people. This is what occurred at the initial encounter between Rabbi Rakeffet, the noted religious Zionist activist, and Rabbi Sherer, leader of the non-Zionist Agudah.
Rabbi Rakeffet goes into great detail concerning his first meeting with Rabbi Sherer in 1982 wherein he seeks Rabbi Sherer’s cooperation in gaining political support for the liberation of a number of refuseniks.