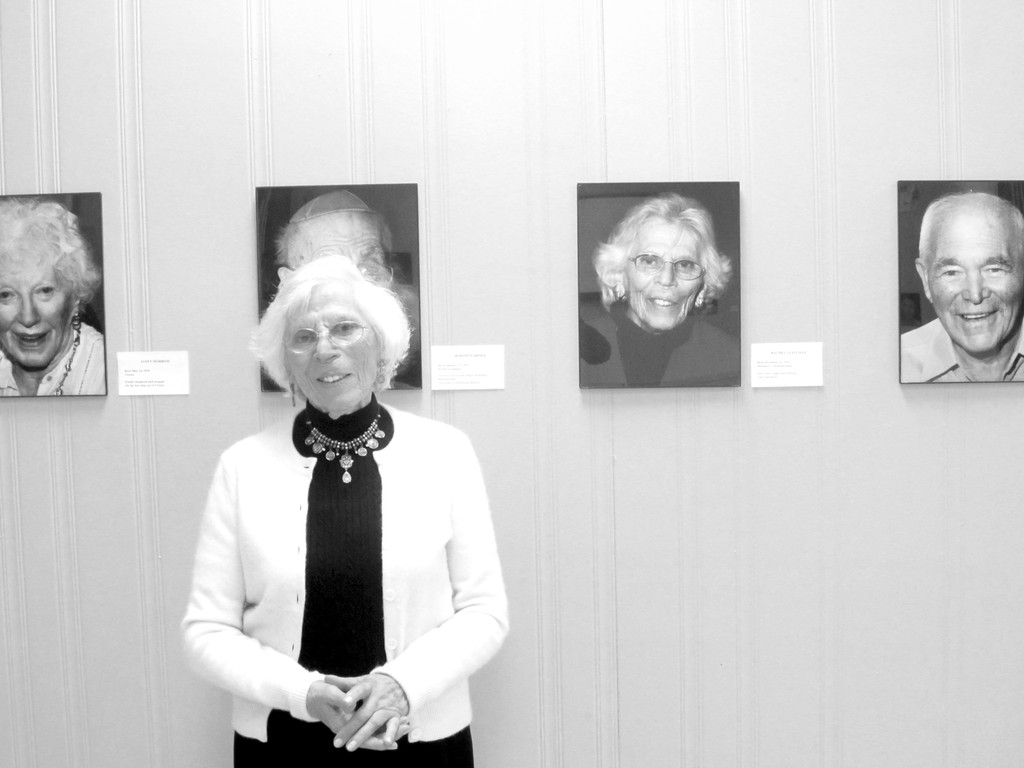 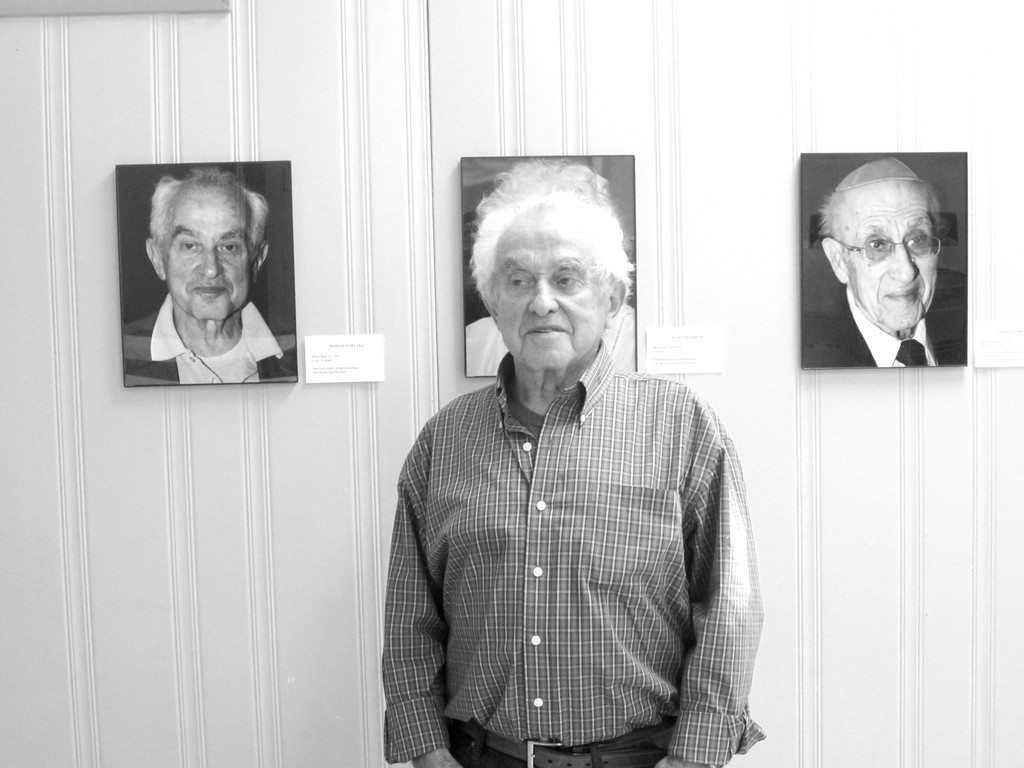 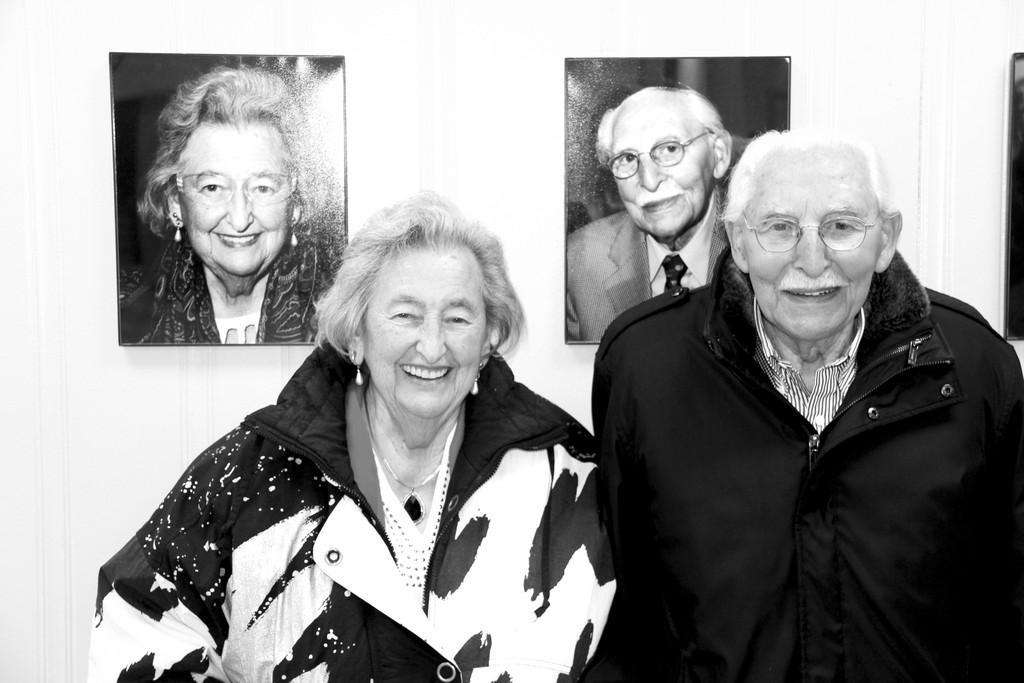 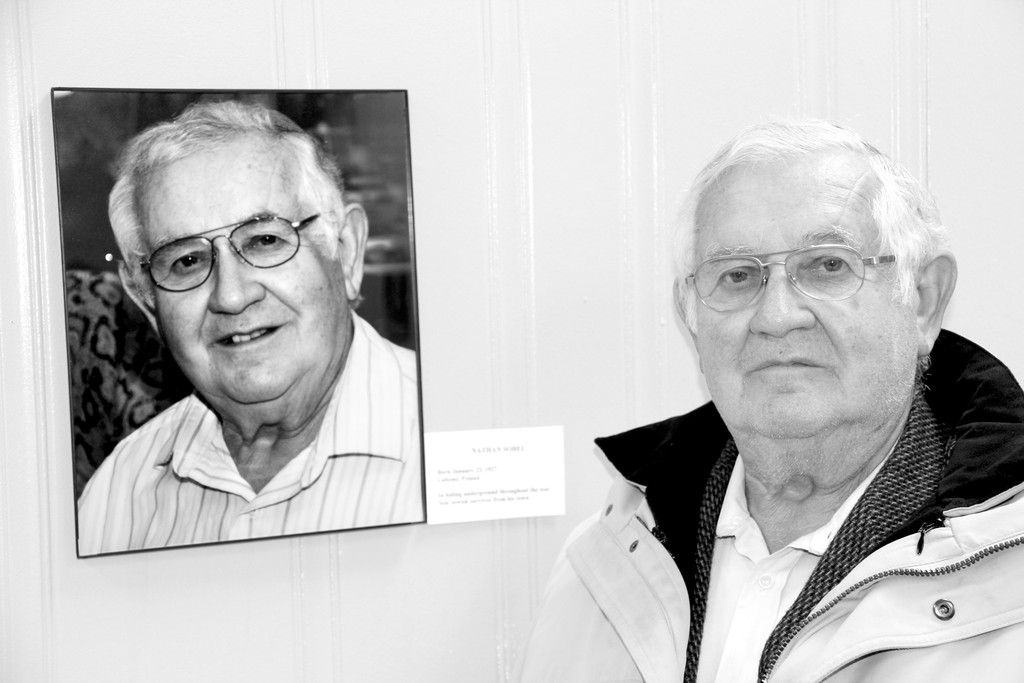 A exhibit of local miracles —35 black and white portraits of members of the Chaverim Holocaust survivors group — was displayed during Chanukah at the Jewish Community Center of the Greater Five Towns.

The headshots, titled “Dreams from Nightmares,” are the work of George Bargad Bogart, a New York photographer who comes from a family of many Holocaust survivors. He chose to use black and white because “it is reminiscent of the time — when the Nazis took pictures of everybody they didn’t use color. I am trying to show that despite everything they’ve been through you can see in their eyes their love and lust for life and how they survived and thrived despite what happened to them.”

Several local survivors posed beside their photographs. Two of them told their stories to The Jewish Star.

Rachel Gleitman of Cedarhurst was born in 1923 in Muncacs, Czechoslavakia, one of seven children. Her brother was taken to the front for a labor brigade in 1939, a year after Hungary was invaded — the Germans “didn’t have a hard time to convince the Hungarians how to deal with the Jews,” she said. Her father was taken in 1943, his beard cut off, and returned to them in 1944. The Jewish school was closed, they were thrown out of their home, forced to leave their possessions behind and slept on the floor in the one room allotted to them.

Soon they were herded to the marketplace and marched through the city, mostly women and children since the able bodied men were taken earlier. “We could see the curtains of the homes move, faces peeking from the windows; no one came out to say ‘what are you doing to these people, what did they do to you?’ ”

She, along with her parents, four brothers and one sister, were packed into cattle cars and arrived at Auschwitz hungry and thirsty. They rushed out of the cars to the yells of “schnell” by the Nazis to face “an elegant German officer with white gloves” who pointed to the right or left. Gleitman’s eyes welled with tears at the memory. She and her father, older brother and sister ultimately survived. She never saw her mother and three little brothers again.

They cut her hair and she, with a group of 500 girls, was herded into the showers.

“There was a cement floor, very clean; all of us so calm and looking up I said ‘no water is coming out of there.’ We sat on the floor. The doors opened and we went out and they gave us shmates (rags) to wear. (Twenty years later, after she was married and had a baby and living in the U.S., she met a woman who recounted that episode and was told that they were to be gassed but were saved when the mechanism malfunctioned.)

As the war drew to a close, the Nazis forced them on a death march in January 1945 and they walked in wooden clogs through densely falling snow. Fifteen girls managed to escape from the end of the column, first from the Nazis, then from a Polish officer, returning to Muncacs then to Prague and to Germany. Rachel taught Hebrew in a displaced persons camp and she met her husband there. She came to Philadelphia in 1949 and, a year later, he came and they got married. “I consider myself very lucky,” she said. “Education is the most important part; make sure to tell young people what happened. We still have to believe that there are good people.”

Bernie Igielski of North Woodmere was born in 1927 in Brezeziny, a small town near Lodz, Poland. His father’s first wife had five children; Bernie was the second child of five children from his father’s second wife. He said he had a “very good childhood” until the Nazis invaded in 1939 and they were forced into a ghetto. He vividly recalled how ten Jews were selected to be hanged.

“One was my cousin,” he said grimly. “They made us watch. I remember.”

In 1941 the Nazis liquidated the ghetto. He recalled seeing his mother holding a child in her arms. “They threw the baby on the truck like sacks of potatoes, all the children, they all died. The Jews were loaded onto trucks and gassed as they drove off.” He said that about 350,000 were buried in pits in Chelmno. He remembers the Nazis throwing babies into the air and shooting them.

When he was transported to Auschwitz, Mengele diagnosed him with scarlet fever and he was quarantined in a hospital there. A Jewish doctor from Prague managed to keep him out of the selections for the gas chambers held every two days. But when he was put with 3,000 others destined for the gas chamber, the doctor from the hospital produced a paper that he was able bodied and put him on a transport to Germany. Bernie cycled through eight different camps.

“I wasn’t supposed to live,” he said. “People say, ‘You’re lying.’ They don’t believe me.” He was on a death march for three weeks. Most didn’t survive. Bernie was liberated by the Americans and lived in Germany, coming to the U.S. in 1948. He was drafted into the U.S. army, went through basic training in Virginia and was to be sent to Korea when a Colonel heard his life story and sent him to work at Walter Reed Hospital in Washington.

His philosophy is a positive one. “The more you give of yourself, the happier you are and the more you derive. I guided my life like this. You will always see me with a smile on my face. I have a lot of friends. My mother brought us up with so much love.” But, he said, “nothing could top what I saw. Scratch my surface and it comes out. If you live with hate it kills your kishkse (insides). Love others before you love yourself. We triumphed over our enemies.” Bernie is married and has two children.

He once spoke to a group in Tennessee to teach tolerance. He said that the listeners lined up and cried. “This is what I like; it’s more than food to a Holocaust survivor.”