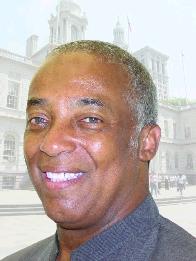 CUNY Trustee and Great Neck resident Jeffrey Wiesenfeld is standing by his decision to interrupt New York City Councilman Charles Barron mid-tirade. The militant black politician, considered by many to be a racist, grabbed the microphone at a building dedication to complain about his seat.

“I don't deserve credit, but there are people like this — Reverend Wright, [former Congresswoman Cynthia] McKinney — people have to stand up to these kinds of radicals,” Wiesenfeld said on Monday. “Our kids have to learn how to oppose these people. If we let it go, it'll only get worse.”

New York, and chairs the council's higher education committee. He took umbrage at his assigned seat at an event at Manhattan Borough Community College and at not being given a speaking role. The newly dedicated building replaces one damaged on 9/11. To express his displeasure Barron grabbed the microphone from the master of ceremonies and delivered a tongue-lashing to Mayor Michael Bloomberg and Manhattan Borough President Scott Lasher.

After the mayor's speech laid into the mayor and Stringer, telling them they were disrespecting him and the students who had accompanied him. That was when Wiesenfeld spoke up.

“You're a disgrace!” he  exclaimed.

The two exchanged barbs for the next minute and nearly came to blows. Barron told Wiesenfeld to “shut up” and that he was a “sickening racist,” before Wiesenfeld left the tent where the ceremony occurred.

“I was about to take him down,” said Wiesenfeld, who was held back by a fellow trustee, “I was trained to fight. A bully is brave until you come at him physically.”

Wiesenfeld considered it a moral victory, he said.

Barron claimed to be livid that the ceremony did not recognize his role or that of students, in the construction of the building, Fiterman Hall.

Barron had nothing to do with the building, Weisenfeld said. It was completed with a gift from the Fiterman family and grants from the city and state. Furthermore, Wiesenfeld added, by moving his chair Barron had blocked the view of one of the main donors.

“He [Barron] sits on the commitee, but it was up to the mayor and the chancellors,” Wiesenfeld explained. “He's a figure head and an incompetent figurehead at that.”

Another CUNY trustee who asked not to be named confirmed Wiesenfeld's account and confirmed that Barron had little to do with the project.

“It's grandstanding and I can fully understand why Jeff was upset with the manipulative ways of Councilman Barron. Once a Black Panther always a Black Panther,” the trustee said.

Wiesenfeld worked in government for over twenty years before joining the finance industry. He worked for former mayors Koch and Giuliani and former governor Pataki. His past disagreements with Barron occurred during the Giuliani administration.

“He's among the worst black anti-Semites,” Wiesenfeld explained. “He gratuitously goes to Gaza. He makes comments about wanting to slap white people. He brought [in] Robert Mugabe [of Zimbabwe] who probably killed more black people than the leader of Sudan. He [Barron] is like a black storm trooper.”

Barron laughed off the accusations.

Barron claimed to have heard of Wiesenfeld only once before but said he was certain Wiesenfeld was a racist. Barron cited an old New York Post report in which a longtime Satmar community activist, Isaac Abraham, claimed that Wiesenfeld had called blacks “savages” and Chasidic Jews “thieves.” The allegations were brought up during Wiesenfeld's confirmation hearings for the CUNY Board in 1999 but remain uncorroborated.

Wiesenfeld was confirmed to the Board of Trustees by a vote of 58-2.

When Wiesenfeld advocated ending remedial instruction in CUNY and instead requiring students to attend high school classes in order to catch up, Barron described the plan as “ethnic cleansing,” according to Wiesenfeld.

Barron initially denied ever saying that but then admitted that he wasn't sure.

“I said so much stuff, I'm not sure. But I know the point I was trying to make, they were trying to make it difficult for people of color to get into institutions. I felt that the standards were racist and would have a disproportionate impact.”

The educational standards were raised and since then, Wiesenfeld maintained, the number of black and minority students in the CUNY system has increased.

Barron is no stranger to controversy. The former Black Panther has been a lightning rod in the City Council since his election. In 2002 he hosted Zimbabwean president Robert Mugabe who was blamed by the United Nations for starving his country's population. In 2004, he was criticized for suggesting that he felt the need to go up to a “white person” and “slap him, just for my mental health.” Barron also sought to have a street named after the late demagogue Sonny Carson and has been criticized by the Anti-Defamation League for supporting a Hamas charity.

Barron said he has sent a letter to Benno Schmidt Jr., chairman of the Board of Trustees of the City University of New York, seeking to have Wiesenfeld removed.

“Coming from anyone that would be a grievous insult and prompt self-reflection; coming from a person who is a paragon of racism and anti-Semitism and dissimilation and just plain evil like Charles Barron, it's like Alice in Wonderland. It's the opposite, it's a compliment,” he said. “Sonny Carson will come back to life before he gets me dismissed.”

Wiesenfeld and Barron each planned rallies seeking to exert pressure to have the other removed from their respective positions.

Back to school? Court will decide fate