jews in the military 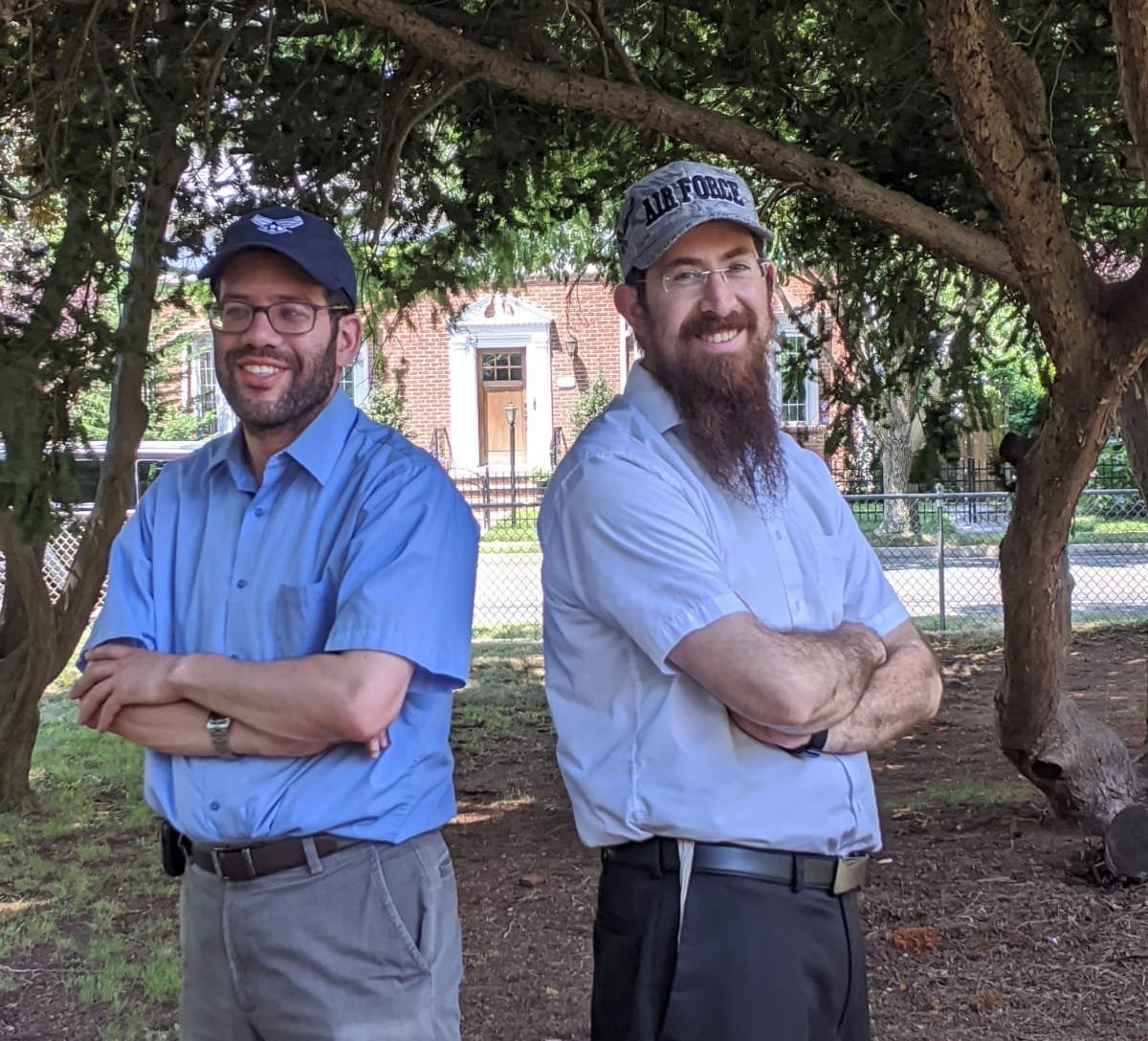 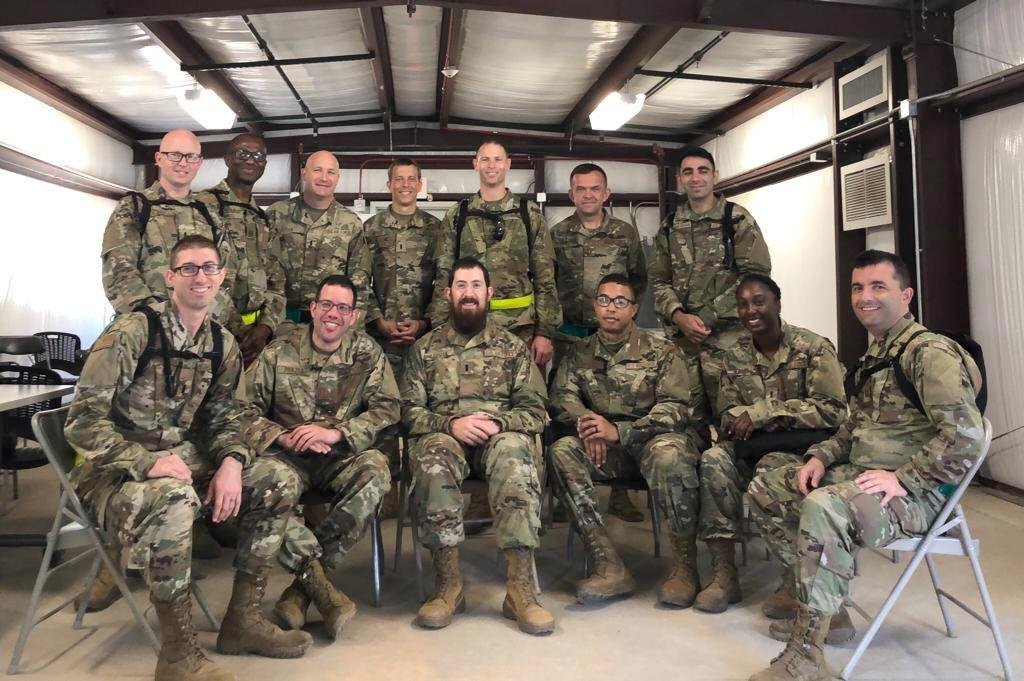 The chaplains training at Maxwell Air Force Base, including Rabbi Yitzchok Lerman and Rabbi Ezra Frazer of New Jersey.
Previous Next
By Elizabeth Kratz, JNS

The weeks before, during and after Shavuot were unlike any other for two northern New Jersey rabbis. Rabbi Ezra Frazer of Teaneck and Rabbi Yitzchok Lerman of Rutherford spent the holiday in Montgomery, Ala., at Maxwell Air Force Base.

Instead of nights and days teaching Torah in quiet study or enjoying cheesecake with family, they, along with 400 other Air Force officer candidates, sat in flight rooms participating in officer training exercises, marching and running with their squadrons, going over military policy and conducting wargames. Later, they went out into the field, sleeping in shipping containers, filling their operational roles during a mock-national disaster.

The approximately eight-week officer-training course was one of the final steps in their appointments to the chaplaincy of the US Air Force Reserve.

Frazer, who received his ordination from both RIETS and the chief rabbinate of Israel, will spend summers in the foreseeable future working as a chaplain at the Air Force Academy in Colorado Springs. Lerman, whose ordinations include one by the former Israeli chief rabbi Yisrael Meir Lau, has been assigned to Lackland Air Force Base in San Antonio. Based on education level and years of work experience, Frazer, who also holds a PhD, is entering the Air Force Reserve as a captain; Lerman’s rank is first lieutenant.

Rabbi Frazer was a Chidon (Bible Quiz) youth champion, a former coordinator of the youth Chidon for the Jewish Agency and a longtime Jewish-studies teacher who now works at the Heschel School in Manhattan. Rabbi Lerman is spiritual leader of Congregation Beth El in Rutherford and Chabad of the Meadowlands. He also teaches at the Rabbinical College of America in Morristown. Frazer grew up in Teaneck; Lerman in Brooklyn.

With about 400 people going through officer training, there were 80 to 90 people in each squadron and then each was further divided into a flight of 16 people, who spent all their time together. A total of 11 men and 5 women were in Rabbi Frazer’s flight.

“I came to feel my flight was my family there. We were all on the same floor in the dorm and had our classes altogether in the flight room,” he said. He expressed gratitude that his roommate assisted him with his religious accommodations, including handling money for his cafeteria meals in advance on Shabbat and Yom Tov.

Religious accommodations in the Air Force are honored as long they don’t impact one’s performance — the mission comes first. Maj. Holly Hess, an Air Force media-relations representative, explained that in deployed environments, kosher (and halal) food in the form of Meals Ready to Eat (MREs) are provided by the government.

“This is also true for the specific dietary needs during Passover. There are protocols in place for airmen who are directed to eat at dining facilities — these are typically airmen who live in the dorm rooms on base — to request a religious accommodation waiver. In this instance, once approved, the member would be paid a meal allowance to purchase their own food instead of being required to dine at the dining facility,” she said.

Rabbi Frazer noted that he went to great lengths to not overburden his fellow officers with his observances but also compensated when he felt he needed to. “I made a lot of effort to study in advance and did very well on the first test, showing them that my keeping Shabbat was not a barrier. It was a very good feeling,” he said.

Both chaplains described how they used pamphlets or paper instead of computers on Shabbat during class time.

“All computer-related assignments I was able to complete before or after Shabbat,” said Rabbi Lerman, who had applied for and received a waiver to keep his beard and wear his kipah (Frazer wore his all the time as well).

During the first full week of training, Frazer’s flight gave out call signs, often a term of endearment or a play on one’s name. They can also be a reminder of an embarrassing mistake someone made in training, or an inside joke of some kind.

“My call sign is “Rabbi.” I really saw it as a sign of warmth and affection,” said Frazer.

Finding enough kosher food to eat on a very active military base in Alabama was, quite literally, no picnic.

“Kosher food was my biggest challenge,” said Lerman. Frazer added that the Air Force required that service members march into the cafeteria as part of their training; they do not look left or right and have only 10 minutes to eat.

“At some point, a medic noticed I was struggling to keep kosher and not getting enough to eat. She took me to the cafeteria when it was not a scheduled meal time so I could find out what was there that was kosher.” Later, his instructor located some kosher-for-Passover meals of chicken and potatoes.

“The Air Force provided kosher MREs, and the kitchen staff went out of their way to assist me by making me a fresh salad for lunch daily. For the first four weeks, I would eat tuna, protein bars, MREs and the salad for meals,” recounted Lerman.

“I kept kosher protein bars in the religious accommodation room, and I had a special dispensation to eat in the flight room because I kept kosher. “I felt bad about this and wanted to make sure people were OK with it and understood why. At some point, part of a group activity was providing real, meaningful feedback to one another. I got feedback from my flight members, saying, ‘Stop apologizing, we want you to be healthy’.”

“Through this feedback, I learned the importance of communicating in a clear and succinct way, what your needs are,” said Frazer.

“Due to COVID-19 restrictions, I wasn’t allowed to have any packages mailed to me. It was only after four weeks that I got permission to have food shipped to me and was able to order microwaveable kosher food,” said Lerman. “We were able to receive a package for Shavuot from Kosher Troops — that we were very grateful for — as well as a Shabbat package from the Jewish Soldiers Project, led by Judge Keith Friedman.”

“Friday night I would make kiddush on a small bottle of grape juice that I brought with me — wine isn’t allowed on base — and had a meal of some matzah that I also brought with me,” said Lerman.

He described how he threw a “Friday-night kiddush” the last Shabbat of training, which several chaplains from other faith groups attended, as well as many Jewish airmen and women. “We had a Jewish woman ‘light’ the candles — electric because fire wasn’t allowed.”

The Jewish Welfare Board (JWB) estimates that there are 10,000 Jews in the US military, and 50,000 military family members. However, Hess noted the Air Force only has 1,105 Air Force members who have self-identified as Jewish, though she indicated that self-identification for faith groups is voluntary. Of 515 active duty chaplains in the Air Force, 18, serving in either active or reserve capacities, are Jewish, she said.

Chaplains are tasked with serving a unique role — not as social workers, but assisting service members with their religious needs and serving as confidential counselors. Rather than providing social services, they can provide assistance to service members experiencing personal or interpersonal issues at work.

“The chaplain is the one person in the military who will not report a person to his or her commander. People benefit from having that one person they can go and let everything out to, to provide words of encouragement, without getting them into trouble,” said Frazer. “We can also update the leadership on morale of the unit and can share impressions regarding demoralization. The commander can make adjustments in how they assign tasks or pace, based on the chaplain’s advice.”

The military chaplain’s role is threefold, according to Rabbi Irving Elson, former Deputy Chaplain of the Marine Corps who now serves as vice president of JWB’s Jewish Chaplains Council, a program of the JCC Association of North America. Chaplains first provide services and religious accommodation to people of their own faith; then they facilitate the religious needs for service members of other faiths; and third, they provide pastoral care to all who need it.

“We are spiritually based but not faith-specific, when serving those of other faiths,” said Elson. “They become great representatives of American Jewry.”

Pastoral care, including caring for the morale and welfare of young people often far from home, is a job in great demand in the armed services. Elson explained that one of the roles of the JWB, an agency that serves as a go-between representing the American Jewish community to the Department of Defense and the Department of Veterans Affairs, is to be an “ecclesiastical endorser.” They work with prospective chaplains to review their rabbinic credentials, and provide recommendations and endorsements to the military.

“These two young rabbis are really the tip of the iceberg. The military rabbinate is one of the best-kept secrets of American Jewry,” said Elson. While Frazer worked with the JWB, Lerman’s ecclesiastical endorser was the Florida-based Aleph Institute, led by Rabbi Sholom Ber Lipsker and Col. (ret.) Sandy Dresin.

Elson explained that Frazer and Lerman were among seven other Jewish chaplains who entered military service this year.

“There is a tremendous shortage of military rabbis. We would love to talk to any ordained rabbi who would be interested in serving in the military chaplaincy. If, today, I had 50 or 75 rabbis apply, I would be able to take them all. That’s how far behind we are,” said Elson.

The financial benefits of serving in the military, even as a reserve chaplain, are not inconsiderable.

“They say reserve provides full-time benefits with part-time employment,” said Frazer. Reservists are eligible for a particular version of military health insurance, a part of their pension program, and the military pay scale is publicly available. There is a scaled housing allowance as well.

“The military is something you join as part of your ideals, but it’s also a good career opportunity. The military recognizes in a country where there is no draft: this is something people are doing voluntarily. There are also jobs that will give them skills to use in the civilian sector as well. It’s helping people, but also a career that people can be proud of doing,” he explained.

For Frazer, serving as an Air Force chaplain is not something he considered doing several years ago, but as a day-school rabbi and teacher, he does have availability in the summers and was considering what kind of work he could take up as a second career.

“I was taken by the idea of doing something different that would give back to the country at large. America safeguards our religious freedom, and a big part of what you are doing as a chaplain is ensuring religious accommodation,” he explained.

Frazer also had family members who lost a child recently, and he felt that it informed his decision to serve. “Reflecting on that experience, I found I am capable of being present and available to help people going through stresses, and it’s an important thing to do,” he said.

Lerman said he was attracted to the role because there are very few Jewish chaplains in the Air Force and a need for many more, and he has a background in mentoring and consulting, in addition to running a traditional Chabad House and programs through Chabad of the Meadowlands. “We cater to Jewish people, but also to everybody, for counseling and teaching,” he said. “We with our heritage as Jews should be among those in the service, helping others.”